When the Dragon Swallowed the Sun Review
Home
Reviews

When the Dragon Swallowed the Sun Review 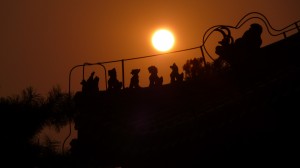 “Once own Nations spirit’s gone. That’s death, isn’t it?”

Although the film gives a fresh perspective on things it does not feel like it’s offering any revealing insights into the Tibetan plight as a whole but further punctuating what already exists which is not really a negative it’s just that if the points had been made more succinct then the film might have had a bit more ferocity behind it. Bringing the issue back into the Western consciousness is a noble feat and I appreciate how hard it must have been to get footage for this film and I commend Dirk Simon for his willingness to continue for seven years in documenting this project and it’s a worthy cause to try and help and spread further light upon. Hopefully the release of the film now will bring the issue back into the Western consciousness as the film is lovingly put together.

It’s informative and offers up a thorough look at Tibetan history in order to give a backdrop to what they face in modern times. Although it is pro Tibet it does try to offer a more balanced view or at least give a chance to show a multifaceted view of the situation from several differing opinions. It also manages to show us how the Chinese civilians see Tibet and how propaganda is used to make sure they think that they are genuinely helping Tibetans as you can see how clearly that’s been fed into their beliefs when they clash with protestors and show them arguing with each other but not communicating with one another.

That is what the Dalai lama is offering, communication. He is very willing to let the Chinese officials have a word with him in the name of peace but he doesn’t wish to resort to any type of violence. He is the most engaging person interviewed in this and seen talking elsewhere as he is a heavily involved in all aspects of the Tibetan movement and his charismatic character comes across well even in the height of seriousness he is able to make a joke.  It is the other celebrity endorsements that feel somewhat tagged on to help promote the film in terms of Desmond Tutu and Richard Gere who both appear at a rally for a short minute and don’t add too much to the film. It boasts a soundtrack by Phillip Glass, Thom Yorke and Damien Rice which feels invasive and out of place at times but is beautifully crafted music to help bring out the emotion.

This is where the documentary holds most of your attention through this honest way of showing where the free Tibet movement currently is and asking questions such as how? and why? Has it lost momentum and how the new generation should go about re-invigorating it. There are some who believe in the Dalai Lama’s peaceful approach but others want a more active fight as they feel that is the way to settle things as well as others who are the sons and daughters of those who chose to live in exile after the Chinese Government claimed Tibet in the 1950’s who have grown comfortable in their respective places because as the years pass memories fade and the movement begins to dwindle and Tibet could remain helpless.

When the Dragon Swallowed the Sun has its heart in the right place and starts off as an evocative piece but ultimately ends up as a lacklustre affair as it is void of a coherent narrative structure and as a result lacks a certain direction which can make it feel tedious and repetitive after a while but it should still be viewed because the human atrocities on display should be seen by all.

When The Dragon Swallowed The Sun is out on DVD 9th December.