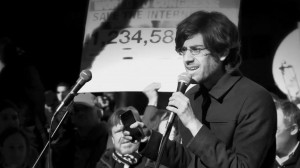 You are most likely reading this review on your computer, which is connected to the internet. Therefore you are probably a proficient computer user and aware of the general in’s and out’s of the internet. This being the obvious case, Brian Knappenberger’s The Internet’s Own Boy: The Story of Aaron Swartz, is the most important, profound and urgent documentary you are likely to watch this year. Whilst this documentary primarily explores the life and saddening death of one of the brightest young minds America ever had to offer; Aaron Swartz, it also opens up a discussion and debate on our own privacy and what is available to us all on the internet.

For those you aren’t aware, Aaron Swartz was a computer programmer and political activist, who was part of the founding team of popular viral site Reddit and was part of the original team that coded RSS (you probably use it and don’t even realise). At the young age of 26, Swartz took his own life as the US government was quite comfortable using this young and intelligent boy as an example against all those termed ‘hackers’ online. But what Swartz did wasn’t what groups like Anonymous do, he didn’t ever do something for the sake of it or because he could; he simply wanted computer users to be aware of their own rights and to be able to access knowledge and information that he felt should be open to them.

Knappenberger’s film is expertly structured; starting off by introducing Swartz’ family and their own memories of this very special boy. It was clear from an early age that he was going to work in computing as he had a natural ability, especially when it came to coding software. At the age of 14 he was part of the team that created RSS (a feed for regularly updating web content) and in a touching story from one of his colleagues, he explained that none of the team were aware of Aaron’s young age. They invited him out once to come and meet with the rest of them and he explained that he would need to ask his mother and he thought it would be unlikely that she would allow him out, considering he was 14 years old!

This film delves deep beneath the surface, interviewing numerous amounts of people who came into contact with Aaron be it through personal life or work (and often people fell into both halves). They speak lovingly about Aaron’s life and his work but most importantly they explain it for the audience. They don’t just assume that those watching the film will have all the information or understand it straight away but instead they chat about his work in terms that the general audience will understand. The events of Aaron’s life are tied in with larger milestones in the internet and moments that the audience are more likely to remember; for example SOPA (Stop Online Piracy Act) and the ways in which Aaron worked with huge amounts of others to stop this act going through because it would harm computer users all around the world. 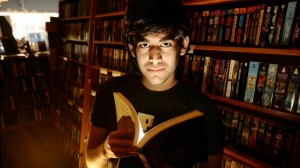 putting them online for free, so that people who can’t afford to pay for all this information could still get hold of it. This film explains in details how he did this and what he did to get past the security of JSTOR and MIT, where he connected his hard drive to their server. When officials became involved, they found this as an easy way to exploit the situation and try to harness control over internet use. Aaron got into trouble, really big trouble and found himself getting ready for court.

The Internet’s Own Boy is an emotional journey as the audience become so connected and involved in this multilayered story that when the film goes to show the extent of what Aaron did and how it helped those around him, they realise how powerful his work actually was for everyone. Here was a boy that could have gotten into the White House, he could have worked with some of the most powerful and important minds in the world and instead the US ignored the potential for helping people and pushed him to taking his own life – cruelly robbed at the age of 26. Knappenberger concentrates on the participants of the film; none of their stories are sensationalised or scandalised, but the audience become comfortable with everyone as they speak about the work that Aaron did. There is never a moment when his story stalls and the talking heads aren’t over done as they are interspersed with archive footage of interviews with Aaron as well as illustrations of what is being spoken about at the time. Like the best of documentaries, this is one that demands to be listened to and teaches the audience willingly.

A damn good film, a startling documentary and something that every single member of the online community should watch, The Internet’s Own Boy will stand the test of time for it’s important subject matter and capturing the history of someone who’s name should never be forgotten.