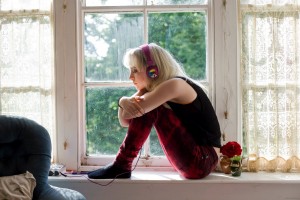 What starts out as a look at a “chin up” and “stiff upper lip” Britain on the cusp of world war three quickly descends into chin down into the ground, bloody lip with a gun pointed to your head. Not even a cup of tea will solve this crisis.

At the centre of the story is Daisy (Saoirse Ronan), an American girl who has been abandoned by her father and sent off to rural England to stay with her cousins. They are wild and free spirited whilst she is grumpy and riddled with the usual teen angst and struggles against this happiness; she desires to remain in control. That is until she lays her eyes upon Edmond (George MacKay), kitted out in a knitted sweater, a hawk perched on his arm, who can resist? His silent dreamy looks dissipate her anger and from there on in she is ensnared by his calm caring nature as he just gets her.

The film doesn’t shy away from this teenage infatuation and it is whether you buy into this “love” that affects how you view the rest of the movie. For me the believability of the love is put into question because of the pacing of the narrative which forces the romance to form too quickly and would have benefited from allowing more time for it to develop before the lovers are torn apart. Not only that but it took some time away from getting to know the younger cousins as well of Piper (Harley Bird) and Isaac (Tom Holland) who assisted in helping Daisy forget all her troubles. After a few carefree, sunny days idly playing in the fresh grass of rural England Daisy forms a bond with her new family and with no adults about to look after them they are free to roam wherever they please highlighting how the youth can make the best of a bad situation until it catches up with them.

The story evolves when these terrible new circumstances drive them away from their woodland paradise and back into the bleak world that has now formed around them. The girls are split up from the boys and taken to different locations and the rest of the movie is about the struggle of getting back to the previous safety of their shared home. This is where it becomes a bleak story of survival as Daisy’s previous ferociousness is put into good use as she becomes the maternal figure to Piper as they clamber across England with only chocolate and water to sustain them. Even during the most gruesome of times there is a dwindling beacon of hope; Edmond. This feels like a stretch as Daisy seems willing to die and sacrifice everything for him despite only being in the throes of romance but her actions remain undeniably laudable even with that in mind because she shows great strength of character.

Saoirse Ronan is perfect. There are a diverse range of emotions and feelings that need to be displayed as the focus of the story shifts and she does everything with aplomb. The other young actors also do a great job at crafting characters you care for.

The film provides us with enough hints to illustrate how bad things have turned coupled with some depressing and shocking imagery that starts making you have those twinges in your heart. The cinematography captures these beautiful vistas of a playful England but also transforms them when necessary to make nature also feel cruel, uncaring and distressing for the characters. It’s the anonymity of the invasion that leaves a big impact and the way it affects the children as we only see it from their perspective. It’s never known why this is happening? Or who these faceless terrorists are? The film sticks you in the middle of a situation giving enough detail to flare up your imagination but leaving out enough for it to have that unanswerable quality about it. It’s an interesting backdrop for the films themes to make their way across.

Kevin Macdonald has made a bold and intimate experience that needed to lessen the pace a bit for the emotional weight of the movie to have that gut wrenching response to it.