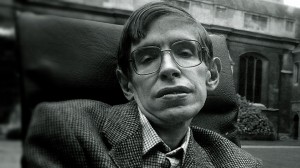 Stephen Finnigan’s documentary, Hawking is one of the most powerful and uplifting documentaries of the year; detailing the life of one of the greatest minds in history, Stephen Hawking. Whilst the documentary does omit certain chunks including Hawking’s second marriage (which ended in tabloid disaster) and none of his children appear to talk in the film (despite the fact, they are spoken about), there is still plenty to look at in this film. If anything, there is a very open and frank discussion and story told about the lives and love between Stephen and his first wife, Jane Hawking (who does appear and chats a lot in the film).

What is most pleasing about Hawking is the influence that the man himself had in the film, he narrates his own life for the audience and just as his book, A Brief History of Time was meant to be a layman’s terms exploration of cosmology and science, he explains simply and subtly about the paths he took and what led him to worldwide stardom with a sense of humour, alertness and above all, the willingness to continue.

The structure of Hawking is very simple; the film introduces the man he now is. Whilst the image of the severely disabled scientist is known the world over 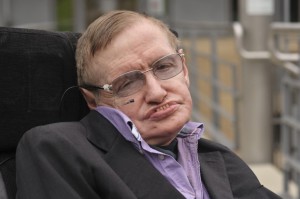 and has been represented in many different ways across film & television (including through Benedict Cumberbatch, The Simpsons and in Star Trek), few know the man sitting behind the electronic voice. This is an in-depth and exploratory look at his life now; chatting with the nurses that have to look after him 24 hours a day to the students and colleagues he grew up with before his illness and after his body started to change. This is their chance to talk about their experiences with Stephen but also his chance to really explain to the world what it was like to get the prognosis of motor neurone disease and what that meant for him, both physically but also mentally.

Once the audience is gently settled with the current Hawking and his laughing nurses and aids, the audience are transported back to his childhood where Finnigan has clearly researched each and every point of the film as well as taking full advantage of archive photography. As well as Stephen telling his own story, his sister and cousin are also featured heavily in the film, explaining what he was like as a child but also what it was like growing up within this family. There is more to the tale than just this scientist and in fact, the whole family is something worthy of discussion. During one interview in particular, a school friend remembers coming home to the Hawking’s and pointing out how odd they were with their open discussions on theology and homosexuality – in fact they may have just been too far ahead of their time and so slowly, the pieces are coming together as to how the world ended up with Stephen Hawking. 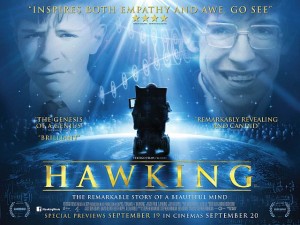 It is during the university years that Stephen’s humour really comes through; he personally reminisces on going out with the guys and drinking, the times he spent at Oxford and the clubs he was part of. He also comments that he never worked hard enough and wished he put his head down more (very funny, considering who this is coming from). He tells tales with compassion, that you may not be able to hear through his voice (for obvious reasons) but rather through his choice of words. It is during these years that he starts to realise where he is destined to work but it is also during this part of his life that he meets Jane, his first wife. Jane Hawking tells her side of the story during the film, from meeting and falling in love, to defying his illness, all the way to realising that she couldn’t remain married to him whilst his career flourished and he became a worldwide celebrity. The film is careful not to take sides and doesn’t proportion blame to anyone, but instead (perhaps not on purpose either) does show that both Stephen and Jane will always be in love with each other but they just cannot be together; which ultimately tugs on the heartstrings of the audience. What is even more interesting and powerful is ongoing discussion of Stephen’s declining health, whilst it never becomes the sole topic of discussion, it does appear regularly in relation to everything going on his life. Hawking really opens the illness up for those who don’t know much about it and aids in the awareness of it.

What Finnigan’s film really does do best is humanise Stephen Hawking, showing that he has the same issues as anyone else. Of course, his mind is far more powerful and he understands how certain things work that the vast majority would have no understanding of whatsoever, but behind the exterior, he is still an emotional man, just trying to get through life and power on. Hawking really does touch the audience as all those who speak about Stephen explain that despite being told he would have just two years to live, fifty years later, he is still going; travelling the world, giving lectures and working. He is truly a model for the rest of us to admire.