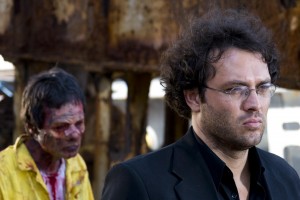 Davi de Oliveira Pinheiro’s Beyond The Grave is a hugely mysterious and confusing fare, which leaves the audience really rather bewildered and confused by the end. Although the film is being sold on it’s Grindhouse aesthetic, it appears that the director has confused this rather greatly with a low budget, poor acting and a confusing storyline. Whilst the first half of this zombie drama has an air of mystery and cult delight about it, the second descends into confused chaos with none of the characters really being quite sure where they fit in.

All the audience is really aware of is that a police officer (Rafael Tombini) is on a revenge journey as he searches for a possessed serial killer for one reason or another. There is little explanation about the world that the characters find themselves in, which makes it difficult for an audience watching to really appreciate the circumstances of the characters. Along the way, the officer encounters two youths who are also on the trail for one of the killers and so after little discussion and deliberation, they join the officer. For the remainder of the film, the officers meets a group of other humans who are currently hiding out in a shelter as well as violent cowboys and a hugely dangerous and apparently unbeatable assassin.

What the characters are either running after or away from are the zombies that appear free to roam the roads with little care in the world. There seems to be 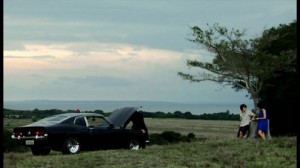 few who have survived whatever actually happened and therefore the humans are severely outnumbered to those flesh eating enthusiasts. Pinheiro is certainly taking a very clearly cut leaf from the Grindhouse and VHS horror tradition, with an unsteady camera and poor cuts throughout making the film look unintentionally spliced together – whilst we know that was the desire for the film, it unfortunately comes across pretty poorly in this production because what that audience is watching isn’t quite good enough to keep cutting away from because it cuts the audience’s attention and interest in the piece.

The humour of these DIY horrors is certainly also missing from the film; whilst a great fan base has grown for this sort of horror, which is very tongue in cheek and does not take itself seriously, it seems that Beyond The Grave is missing that altogether and whilst the film itself is trying to seem deadly serious and dark, it just simply falls along the waste side due to several larger issues of the film. For starters, the pacing is not good for a zombie horror film. Whilst it may be understandable that Pinheiro was trying to create an arthouse feel zombie film, where the audience were brought slowly into the action whilst everything was working its way to the reveal, it instead leaves the audience wondering why they should care at all. The story moves in such a boring fashion, that is really takes a while for a zombie to be shown and even then, they really do not represent that much horror or danger to the characters. They seem to walk at an unfathomably slow pace, which simply allows the characters to get into the car and drive away – horror indeed! 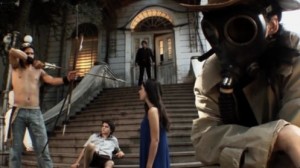 Furthermore, the acting in the film is pretty dire. There seems to be no emotional, no succinct delivery of the lines (which in themselves aren’t all that enthralling) and really little desire to try and explore what each of the characters is actually trying to achieve in the film. There are very clearly moments where the cast want to delve a little deeper and Pinheiro allows them to do so; in particular a scene when the teenager girl finds some make up and starts to apply it in the mirror. The owner of the make up, a heavily pregnant women comes in and they connect with very few words but simply through the female action of putting on make up – they say more with their eyes than anything else in the entire scene. A second moment like this occurs later in the film when the officer allows one of the zombies to live because he is now blind and it was someone that he used to work with; although very slight, we are delving a little deeper to see what makes these characters tick. In one of the most powerful scenes in the film, one of the humans, whose main objective is to kill as much as possible, burns the ex-partner zombie to death. It is brief and the audience are aware for a while that this is going to happen and the audience start to sympathise with the blind zombie so therefore when the dramatic flames occur, it really does affect those watching.

Whilst fans of B movies and DIY horror may be able to appreciate where Beyond The Grave is coming from, there is no way that it is going to be making too many lists of films to watch anytime soon. It does have an interesting appeal, flipping the zombie movie on it’s head with a stab at making an arthouse horror film and yet unfortunately it seems Pinheiro’s film really does have a destiny of getting lost in the cult world of cinema, for someone, one day to find and perhaps celebrate over.