Cambridge Film Festival: Bring Me The Head of the Machine Gun Woman Review 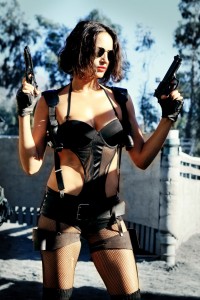 Ernesto Díaz Espinoza, fresh from his short on The ABC’s of Death (C for Cycle) returns with the quite brilliantly named, Bring Me The Head of the Machine Gun Woman. Without any knowledge on the film whatsoever, the audience are already quite equipped to assume this is meant to be a film that will utilise aspects of the grindhouse genre with a splatter of exploitation. What the title does evoke is a sense of filmmaking by Quentin Tarantino or Robert Rodriguez, which is quite apt considering the pair renewed the grindhouse genre for a new generation of film lovers. Machine Gun Woman runs parallel to the world created by Rodriguez in Planet Terror & Sin City, creating similar images of strong women.

At the start we are introduced to the two main characters, both of whom live completely different lives. First, the machine gun woman (Michelle Rodriguez lookalike, Fernanda Urrejola), who is clad in her shining leathers and guns. She effortlessly defends herself, assuring the audience that her will to survive in these odd circumstances is second nature to her. The mafia is out after her, but that doesn’t even appear to pose a threat as she just guns them down. She is also very aware of her own sexuality, when she pins one of the assassins down and her breasts appear to take up a vast majority of the shot. Whilst Espinoza’s camera really could have created the machine gun woman as a desirable object, just there for the titillation of the audience, she does in fact give the appearance of having a back story & history, which makes her character three dimension and very believable. The second main character is Santiago (played by the hilarious, Matías Oviedo) who is a local MC at a club that the mafia run. He is an innocent bystander in life, spending his time playing video games and listening to the latest music. He lives with his mother and does as he is told, but he does have a yearning for more in life and gets involved in something that ultimately is bigger than him.

The mafia leader, Che Sausage (Jorge Alis) is the ex-boyfriend of the machine gun woman and now their plans are to kill each other – but which one is going 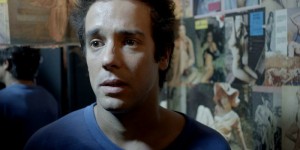 to get there first? When Santiago overhears Sausage’s plans to kill her, as he is in the toilet, he finds himself in a catch 22; he either has to offer himself to capture her, kill her and bring her head to Sausage or he will be killed – the answer is obvious. What thus ensues is a sometimes hilarious, sometimes dramatic but always bloody ride through a series of missions to find the machine gun woman and either persuade her to kill Sausage or kill her himself.

Structurally the film is rather brilliant, having take a leaf out of games such as Grand Theft Auto. Each part of the film thus becomes a named mission for Santiago (from searching for the machine gun woman’s associates, to escaping from town alive) and at the end of the each one, flashes on the screen say whether he has passed or failed the challenge. The fonts and type of language used are so reminiscent of the video game that it adds another level of entertainment for the audience; especially those who are fans of the games. This structure is extremely clever because although the film is relatively short, quite a lot happens and so by naming each section, the audience are being propelled forward in the narrative, even if small bits are missing.

Also, the primary audience for a grindhouse picture such as this probably has a good gaming knowledge and just as audiences have seen with Tarantino films; this is a film makes by geeks for the geeks, who want to bring in references from other parts of their life. There is a feeling of excitement if the diegesis of the film is similar to that which, they play daily on their gaming consoles and furthermore brings the audience into the story of the characters, making them feel as if they are taking an active part in what is going on. 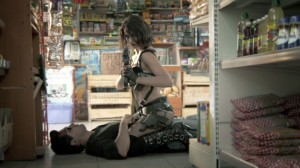 Performance wise, the two leads are brilliant because they are so different from one another. Whilst Urrejola is cool and sexy, Oviedo plays Santiago as a worried school boy who has lost his way. Yet despite their differences, both are so well performed that their appearance in each others worlds seems natural and believable.

Bring Me The Head of the Machine Gun Woman is a brilliant new addition to a genre that is so frequently hit & miss – whilst the film is a little short and if you aren’t aware of the Grand Theft Auto elements, then the structure may seen a little repetitive, for the vast majority of the audience that would turn this film on, it is a winner. Espinoza has created a thrilling mix of sexy, gory and downright insane, with a strong structure and a succinct storytelling method.