“No one can save you from the terror of loneliness”

Pharmakon (Joni Shanaj) deals heavily in emptiness. The spaces in which the characters inhabit are dead, run-down areas. Nothing is thriving in this bleak world they have the misfortune to reside in.

The visceral opening is in stark contrast to the rest of the film which is devoid of colour and replaced with listlessness. The main character Branko (Klevis Bega) is sailing through life with little need for a purpose. He’s come back from studying at University in America to his home town where there is nothing going for him. He is left with his dad since his mothers passed away but they loathe each others presence. They probably aware of the void the loss of their wife and mother has left and are unsure how to fill it and interact with each other. Both are individualistic and neither realise they might need each other.

The film is very slow paced which suits it perfectly because that lingering camera on the characters actions adds to the clinical nature of the film and really drags out those awkward interactions and lengths the silences which is important to the films overall narrative. The film focuses in on only a few characters giving it this family vibe to it which is important because the role of family is a big issue that plays out in this film.

Everything in Branko’s life his father owns, he hasn’t got anything he can truly call his own. He is employed by his father in a dead end Pharmacy job. For all intense and purposes he is a melancholic loser who’s long seen the light in his life go out and lives a meagre lifestyle. The father, Sokrat, is apparently a well like doctor. Sokrat (Niko Kanxheri) is an oncologist and lives a life we barely get to see. Everything is hearsay and purely based on his word. He is well respected in the medical profession, he has been to other countries to help the sick but you never get to see that. Here he is a failed father figure, a possibly corrupt man and most definitely a lonely one. For someone who has everyone who loves him he can’t even obtain the affections of his own son and at points you are unsure if he even wishes for that.

Ambiguity is a major part to this movie as a lot of things are left up in the air and the whole film maintains a sense of mystery. None more so than the woman of both men’s desires, Sara. (Olta Gixhari) You remain unsure whether she is innocent in all this having got caught between the two men or has intentionally orchestrated this herself for her own gain. She never gives a truthful answer and you learn very a little about her aside from the fact that her mother is dying of cancer and that Dr. Sokrat is helping her out with that and medical school. This could mean that he wants favours in return and it’s hinted at again but never shown. If she does have a relationship with him it’s never seen and it is this which drives Branko mad. 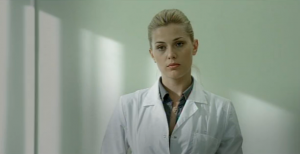 Branko is a very insecure man. Unsure of who he wants to be and how he wants to tackle this world in Sara he finally latches onto some good in his life but finds out that his dad has possibly got there first. This puts further pressure on their broken father/son relationship and leaves them even more alienated from each other’s feelings. Sara’s own sense of family is also dwindling which is why she might also be clutching on to the both of them. They are all looking for a sense of hope.

The acting feels very human. There is a certain delicate heaviness required in the roles that is hard to get across but the actors succeed in bringing across the idea that they are emotionally tearing each other apart for scraps like animals. When people do communicate with each other the dialogue is pertinent to the films themes about loss, powerlessness and the overarching idea that the youth as a whole might not have control in this insular society and this phlegmatic existence Branko is a backlash to that as it’s the one thing he can have control of over his father. The characters lack a certain maturity in engaging with each other and it’s something you hope they learn through the course of the film otherwise they’ll be on the path to their own self destruction.

It’s a pensive piece of cinema that makes you ruminate about it for a long while afterwards because although it feels empty it contains a large amount of truth. 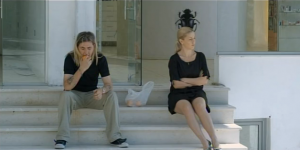