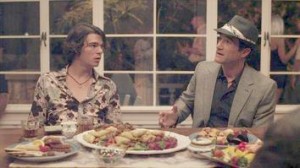 Jake Squared is The Nines of the 2010’s, and unfortunately a vast majority of the audience will be unaware of John August’s 2007 drama starring Ryan Reynolds for one reason or other. Whilst both films deal with consequences, the merging of realities and the idea of multiple layers within our personalities, they are both films that are not the easiest to follow and do cause the audience to question themselves, something that few people really want to do. But what Jake Squared does have is one of the smoothest actors in the world as it’s lead; Elias Koteas plays Jake at the age of 50 and 40 and 30. Then there is Kevin Railsback who plays Jake at 17 and not forgetting Mike Vogel (Under The Dome) who plays an actor, playing Jake. Throughly confusing so far? 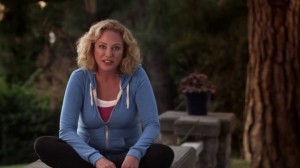 personality finds himself wanting to make a movie about his life. He has it all planned out and breaks the forth wall to chat directly to the audience; this is a great decision on behalf of actual writer/director, Howard Goldberg, who wants to bring the audience into the film and place them in Jake’s life. If they become part of the tapestry of the film, they may find a thread to latch onto. Jake hires the really rather sexy ‘actor’ Jake (Vogel) to play himself, at what age this Jake is meant to be, we aren’t too sure but we know that in between jumping into the hot tub with bikini babes and taking the kids to school, he is stuck somewhere in between. 50 years old Jake’s plan is to hold a party, at this party Vogel should pretend to be Jake, find himself in his surroundings and make himself at home. Whilst real life Jake intends to record the party and make a film from this. What neither bargain on is when parts of Jake’s life start to appear and attach themselves to the film being made; Jakes from years ago, his parents, his ex-girlfriends and his ex-wife. All in all, the film is actually a satirical and somewhat confusing appraisal of someones life. 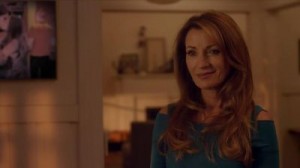 Like a make shift ‘This Is Your Life’ but without the exultation and celebration, Jake Squared is cleverly illustrating that along the path in life we pick up people and they affect us in an integral way at that point, but they can just as easily fall away and be forgotten. Whilst their affect can reverberate throughout lifetimes, it is interesting how we can quickly forget about people we once loved and how hindsight is something we all love to hate. The film is also an emotional look at what happens when you consistently ruin every romantic relationship you ever had; Sheryl, Beth, Joanne, Jocelyn, these are the women in Jake’s life, loved and lost.

Whilst this film will quite possibly remain undiscovered for quite a while, it does lead quite 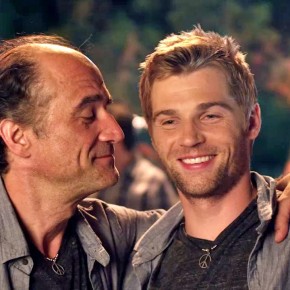 an impressive cast list including Koteas (The Curious Case of Benjamin Button, Shutter Island, The Killing), Jennifer Jason Leigh (Revenge, Weeds, The Spectacular Now, Kill Your Darlings), Virginia Madsen (Sideways, The Number 23), Jane Seymour (Smallville) and Vogel (Cloverfield, The Help, Blue Valentine, Under The Dome). All the cast, whether they appear for a large period of time or shorter, are simply divine. They bounce of each others drama and humour, they react brilliantly to what they are being told and Koteas above all proves he a talent worth recognising, simply because he is so loveable as a character & actor.

What is really rather wonderful about Jake Squared is that he is the everyman, a character that isn’t anything more than out of the ordinary and there isn’t anything particularly exciting about his life; anyone and everyone can both sympathise and empathise with him. We understand the concepts of lost love and over making mistakes in your life, but really what the film is importantly trying to say is not to live with regret.

Whilst the film does become a little confused and jumbled in the middle, it doesn’t ever not make the audience smile or laugh. There is a sharp twang of Woody Allen humour, a Jewish New York sense that Goldberg has expertly mastered and captures the audience with. Jake Squared is a sweet and compelling story about looking inside yourself to realise why you are where you find yourself.