Raindance Film Festival: I Play With The Phrase Each Other Review 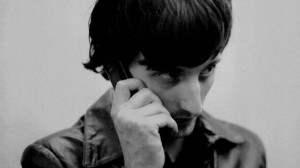 A film comprised entirely of cell phone conversations – that is what Jay Alvarez’s I Play With The Phrase Each Other tells the audience from the outset – that is what he and the cast set out to produce and that is, at the end of the day, what they came up with. Whilst the final product may not be something you’d recommend to your friends based on the acting ability, or the direction or even the narrative for that matter, it is in fact the uniqueness of the idea behind the film that makes it so watchable, compelling and surprisingly enjoyable. A cinephiles refuge in a busy world, filled with colour and 3D and all sorts of crazy ideas; rather I Play With The Phrase brings it home, strips away everything and leaves a core (the film is also in black and white, probably down to budget but it adds to to the atmosphere), which manages to be both icy cool and wildly pretentious all at the same time. But it doesn’t stand out as so, in fact, this film couldn’t have come at a better time – quirk is in, the alternative is in; in a world where comedians like Lena Dunham can produce television shows like Girls and Greta Gerwig can get away starring in the hugely popular, Frances Ha, it goes to show there is an audience waiting for this self important, self flagellating sense of humour, which is both ironic and frustrating all at the same time.

Whilst the story of I Play With The Phrase is somewhat convoluted and confused, there was something sincere and charming about the whole experience, 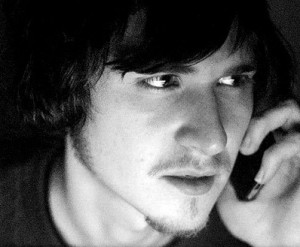 which made one forget the issues and instead praise the efforts of all those involved; even the cast, from some of their reactions were unsure what was going on. In a world where we rely heavily upon our mobile phones and the representation of ourselves on social media, it doesn’t come as a surprise that this film was made. In fact it is timely; at a point where discussions are being had all over the world about rules surrounding social media, this film is a breath of fresh air as it removes the terror of the modern world and instead replaces it will pure and unadulterated satire.

Written, directed by and starring Jay Alvarez, I Play With The Phrase follows a huge selection of characters, some are connected in more straight forward ways than others whilst some of them seem somewhat out of place. At the crux of the tale is Jake (Will Hand) who is persuaded to move to the city by Sean (Alvarez), who promises Jake a fantasy that the world is better out there and his wildest dreams will come true. But when Jake up and leaves his home without leaving word and turns up at Sean’s doorstep, Sean cannot be found and instead Jake goes homeless, moving from hostel to hostel trying to find a job. Various other stories appear to exist in this world like Erin (Megan Kopp), the ex-girlfriend of Jake who is starting a new relationship but is also worried that she is starting to hate the public due to her low paid, high maintenance job. 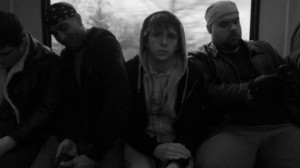 Despite the vast array of characters, something about the film allows the audience to wander in and out of the scenes, losing connections and picking up other pieces of the puzzle that interest them. The film, which clocks in at almost two hours, is far too long but this length does allow a sense of meander through the world of these characters, something that ultimately pays off in the end. Whilst the vast majority of the scenes remain static, it is the scenes where Jake is trying to get a job at various places that remain the most enjoyable as well as the phone messages from his mother. Jake, by nature is a neurotic, constantly measuring the level of radioactive contamination around him. He holds the phone at a distance, as to ensure he doesn’t catch germs and freaks most people out around him. But cleverly, what Alvarez does do is allow these scenes a small moment of social and economic commentary; he shows a young person trying to get a job in an economy where jobs don’t actually exist and he juxtaposes this with the popular pop hold music, most the songs are from a Ke$ha album (with one from Miley Cyrus as well) and these moments represent both the light and dark in these characters lives. Furthermore, the scenes when Jake is listening to answer phone messages from his mother are both funny and completely heartbreaking at the same time; he has left without a trace and at first his mother is worried. Anyone in the audience can sympathise with both Jake, wanting to get away and his mother, wanting to make sure he is okay. But as the film goes on we learn the issues his mother has also had as she slowly unwinds through this series of messages.

Difficult to follow, sometimes boring and unnecessary and yet extremely important and interesting, I Play With The Phrase Each Other, may not be the best film of the year (in fact, far from it) but it is a film worth discussing, worth dissecting and at the end of the day, congratulating the filmmaker just because it was made.