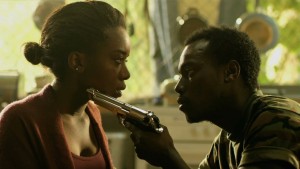 Adil El Arbi and Bilall Fallah’s moving and provocative, Black, takes the tale of Romeo and Juliet and moves it to current day Brussels. Instead of the Montagues and Capulets, the warring families are rival street gangs where Mavela (Martha Canga Antonio), a girl connected to the Black Bronx gang, meets Marwan (Aboubakr Bensaihi), a member of a rival Moroccan gang.

The pair meet at a police station and find their worlds torn apart when they try to hide their relationship from those around them. They know the consequences of people finding out about their relationship and so must do all they can to keep one another safe. As well as a love story, Black has a strong social and economical element, which takes a nod to films like La Haine. In Brussels, there are unmanageably high rates of youth unemployment, which leads to young adults finding a place within a gang to make money and start their life – although they don’t pay heed to the danger they place themselves in everyday. There are numerous street gangs that exist and young people are drawn into these gangs without really even realising.

This is what happens to both Marwan and Marvela, who are young and starting to make their own decisions in life but whilst they believe there are few prospects obvious to them, they find themselves taken in by a gang that promises them the most important thing of all – safety and a family. Whilst the pair try to resist one another, they realise there is no point in fighting it and decide that they are going to flee together before anyone else finds out – but we all know how the story of Romeo and Juliet ends…

But much more interestingly and what make Black an important contemporary film for today’s youth is the understanding of the world they find themselves in. The film, at points, feels more like a documentary as it explores and dissects the world that the characters live in. It doesn’t judge them and even at the moments of the hardest violence or abuse, the director’s are more interested in exploring the world than pointing the finger and saying what they are doing is wrong. This subtleness of the film is something that really draws the audience in and Brussels as a city certainly becomes as important as the story and characters themselves.

There are specific set pieces in the film, which really are highlights and show that both director’s are certainly 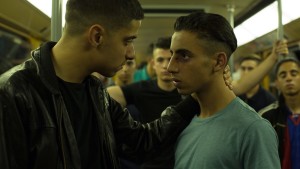 talent to watch out for the in the future. The choreography of the violence (which at times is quite difficult to watch) recalls the films of Noe or Haneke – the camera watches and let’s the audience become complicit in the action. A central montage sees a group of girls fighting in the middle of the street, the camera stands and slowly backs away from the fight but never gets involved, like those others standing on the street – just watching.

Black is certainly an interesting piece of filmmaking, vital and important and despite some flaws (sometimes the pacing is a little slow and it doesn’t often go into enough depth with the characters, instead relying on the fact that the audience will already know the story), it does show a team of actors and filmmakers, who are to ones to watch.

BLACK is in UK cinemas and available on VOD now.