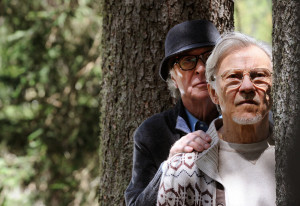 Writing about Youth without hyperbole is surely a difficult thing – freshly off the back of Oscar winning The Great Beauty, Paolo Sorrentino returns with this beautiful, unadulterated masterpiece about old and new, growing up and looking back, aging gracefully and getting everything you want from life. Featuring an incredible all-star cast led by Michael Caine and Harvey Keitel, Youth also features Paul Dano, Rachel Weisz and Jane Fonda (who comes in like a whirlwind and steals the show by setting the screen alight). Featuring great cameos from Paloma Faith (in a way like you’ve never seen her), Ed Stoppard, Alex Macqueen and soprano Sumi Jo (who ties the film together with an unforgettable performance in the final, heart stopping scene).

Fred Ballinger (Caine) and Mick Boyle (Keitel) are two old friends who are both on holiday in an exclusive and reclusive resort in the Alps. The colour burns on the screen as to be expected post The Great Beauty, highlighting once again that the locations of the film are just as important as the characters and the dialogue. Fred is a retired orchestra conductor who is being badgered to come back and perform his requiem for the Queen of England. Mick is a film director, who is still working and truly believes that his latest project really is his requiem. Both are looking for peace and meaning but in different directions, the pair look on at the lives of their kids (Weisz plays Lena, Fred’s daughter and Stoppard plays Julian, Mick’s son), in the dramas of the guests around them, the writers that work tirelessly for Mick and at some point, back into themselves. Mick considers his life’s work after a stormy and life changing scene with Fonda’s character, Brenda Morel whilst Fred spends time remembering how he treated his family and at what point his work took over.

Youth is a rare film that manages to traverse the line of intellectual comedy, existential crisis, emotional drama 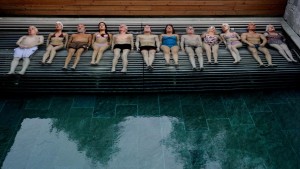 and sometimes even relies on symbolism and surrealism to get its points across – but Sorrentino manages to perfectly tie all lines of enquiry together in an often stunningly beautiful and touching way. The pair that the film is centred on come together and split apart throughout; talking about their lives, sex, how many times they’ve managed to go to the toilet that day and quite possibly what is left for them in the future. No matter what age you are, there is an inherent understanding for what they are talking about – living life and everyone can empathise with that.

The soundtrack is also an outstanding element of this film – starting with a cover of ‘You’ve Got The Love’ from The Retrosettes and ending with David Lang Oscar nominated ‘Simple Song Number 3’ (sung by Sumi Jo) – rather than telling you how you should be feeling at a given point in time, the film waits to make you feel and then brings in the music to cushion your emotion further.

Youth is a touching, evocative masterpiece that deserves to be watched, adored and loved.