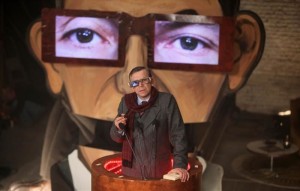 Perhaps best known for Eternal Sunshine of the Spotless Mind starring Jim Carrey and Kate Winslet, Michel Gondry returns with Mood Indigo, a charming, whimsical and fantastical romantic-comedy-drama based on the unfilmable story by Boris Vian and starring two of France’s biggest and most talented exports; Romain Duris and Audrey Tautou. Whilst it hasn’t even been a few months since the release of Chinese Puzzle, which finally saw Duris and Tautou’s characters in Cédric Klapisch’s brilliant trilogy finally realise they were made for one another, it seems another director recognises the chemistry between the pair and this comes free flowing in this brilliantly conceived film.

Featuring all the usual daydream hallucinations, manic uses of colour in the seemingly otherworldly reality that these characters live in, which an audience has come to expect from Gondry, there is something charming and delicate about Mood Indigo, which has escaped his previous films. Duris plays Colin, a bachelor with an eye for inventions – he seems to never have to worry about money and lives his days out with his friend, Chick (Gad Elmaleh) and his cook, Nicholas (Omar Sy). But as Colin discovers that Chick has a new girlfriend, he starts to think that perhaps it would be the right time for him to find someone to fall in love with and share his beautiful world. The pair are invited to a party from a cousin of someone, who also happens to be a socialite and there Colin meets and instantly falls in love with Chloé (Tautou), an excitable girl with a thirst for life and discovery. They are instantly enthralled with one another and find themselves dancing (equally badly) to Duke Ellington.

From here on out, the first half of Mood Indigo becomes the sweetest of romantic comedies; elegant and with just the right amount of sentiment that the entire 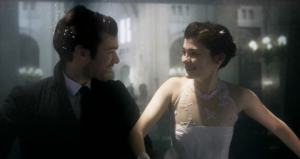 audience is gripped from the first catch of the eye. In Gondry’s fabulously designed world, you can ride clouds that take you over and under the city, records duplicate onto extravagantly made players and couples literally race to the alter of the church to get married. Rightly so and as come to be expected, the relationship between Duris’ Colin and Tautou’s Chloé is loving and innocent, both the characters have this sort of childish naivety that makes their coupling even sweeter. The chemistry between the pair, which has been practised over many years of making films together, is spot on – it’s as if they could finish each other sentences. But whilst on their honeymoon together after marrying in their whirlwind romance, Chloé becomes unwell when a flower starts to grow inside her lungs. She slowly shows more symptoms until they go to the doctor who suggests several remedies, but none truly help. Over time, Colin’s money starts to run out and he can longer rely on his mad inventions, instead he must go and work in a factory. Here starts the second half of Mood Indigo, a sad but important story of what you would do for the one that you love. 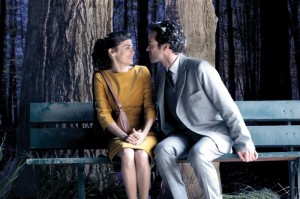 Over time the colours of the film start to fade, best shown in their apartment, which was once full of joy and life but since has started to darken and crumble around them – talk about some sort of pathetic fallacy when the actual world around the characters starts to mirror their moods and emotions. Although the pace of the story changes, it never lets go of the audience, constantly keeping them intrigued and waiting to see what the next chapter will hold for our lovers. From the very first moment, the audience is rooting for the romance to work and continue forever, this pair represents each and every single person in the world who just wants to find the ‘one’ and keep hold for them so whilst the world around them feels futuristic and artificial, the stories and the characters feel far from it.

Gondry has created with Mood Indigo a thrilling and spectacular tale of romance in it’s most beautiful form – it’s funny, fabulous and full of heartfelt emotions that keep the audience rooting for the characters from the opening credit to the closing scene.