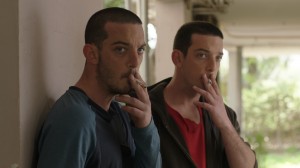 Tom Shoval’s Youth is a delicately told and wonderfully written comment on family, circumstances, economic injustice and gender issues whilst also commenting on the boundaries that the youth of today are willing to break to get what they feel they are entitled to. Brother duo, Eitan Cunio and David Cunio play Shaul and Yaki, two very different brothers who go to extreme lengths to help out with the financial difficulties of their family after being pushed into hard times.

Yaki has come home to visit after his enlistment with the army, he wears a uniform and carries a gun that never leaves his shoulder – this small but delicate detail is Shoval’s way of illustrating the sustained threat of violence throughout the film, something that the characters have to live within their day-to-day lives. His brother Shaul is quiet with few friends and seems to grow weaker when standing next to his brother. The juxtaposition between the brothers allow the audience to come on a real journey with both of them, all the way to the gripping conclusion, where one can see the changes that have happened within themselves. The film begins with a wonderful sequence of Shaul silently following a girl from his high school back to her house – he slithers behind her like a snake, which builds up the tension for the audience watching.

When he hurries home, he meets with his brother and their intentions slowly become clear. Their family is crumbling; their father has lost his job and whilst their mother is trying to hold everything together, she is slowly losing grasp on all those around her. Their home is constantly under threat of being taken away from them and no one seems to be able to talk to anyone else about how they are really feeling. But the brothers have decided that it is time for a change; they decide that if they kidnap a girl from school, they can blackmail her wealthy father into giving them money before returning her.

They plan slowly and carefully, replacing the lock in the basement so only they can get in and bring a mattress down

so she has somewhere to rest. Youth makes some cleverly crafted comments on the representation of violence today, especially with a younger audience; whether it is from the movies or from the world Shaul and Yaki live in, they are constantly surrounded by casual acts of violence and assault, which leave them immune to its real and lasting power.

The sequence when the brothers finally act out their plan and kidnap the girl is one of the powerful and intense of the film – they pull masks over the faces and run up from behind. Yaki places his gun, which his country gave him to look after them against her and threaten her. They cover her eyes with patches so she cannot see their faces and grab her from behind. They take her onto a bus to bring her home and not one person acts or questions why she may be quietly quivering between the two brothers. They stare and possibly in their heads they question, but perhaps it is because they see an Israeli soldier and they don’t feel the need to get involved or because they really don’t care but this sense of torture and danger slowly builds until they throw her into the basement.

When they take pictures of the girl and the danger she faces, they send them over to her parents requesting the money but when they don’t hear anything they panic and she explains that because it is the Sabbath, no one will answer. She has disappeared before and always comes back, therefore no one will really worry. Both a stab of humour as the brothers plan backfires but also creating a sense of horror that anything could happen to her now but because it is classed as a holy day, her parents wouldn’t know. 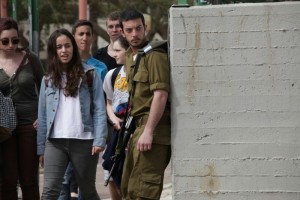 Soon Yaki has to leave for training but not before their mother arranges a family dinner to see him on his way. Each member of the family is trying as hard as they can to keep up appearances, but Shoval’s film works best when illustrating the contradictions and hidden ironies of his characters; whilst they smile upstairs and move freely in their apartment, the girl remains tied up and choking downstairs.

Youth is beautifully filmed, with Shoval showing off his knowledge for creating an intense and emotional atmosphere. Touching on many important subjects, Youth is a film that says a lot and desires repeat viewings to grasp the multilayered story. Both Cunio brothers have sensational chemistry, playing off of the emotions of one another. Youth is one to watch out for and Shoval as an upcoming filmmaker, with a lot to say.