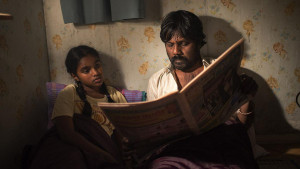 A tense, unknowable violence bubbles away throughout Dheepan, Jacques Audiard’s 2015 Palme d’Or winner – a beautifully structured and impeccably paced film, which is about a France that many aren’t aware of. Much like Robin Campillo’s Eastern Boys, Dheepan deals with the outsider coming to France for a better life and dealing with acceptance, or the lack of it from the community.

Dheepan (Jesuthasan Antonythasan) is a fighter in Sri Lanka, during the time of Civil War but with the fighting coming to an end and a defeat very likely, many move on and decide to flee from the country. Along with two others (a young girl and a 20-something woman), Dheepan and the pair are given passports of a family who have died and end up on their way to France for a better life. Once they arrive they move from home to home, never for too long and never really ever settling until Dheepan gets a job in the projects, in a run down housing estate in the suburbs (a France we so rarely see on screen but it pierces through sharply).

The family moves into the apartments where Dheepan and Yalini (Kalieaswari Srinivasan) must strike the right balance, keep the secrets of the world they have left behind and continue to move forward and assimilate into the culture around them. They send their ‘daughter’ Illayaal (Claudine Vinasithamby) to school, where she begins in the classes with special needs students due to her lack of French, but soon proves that she is highly intelligent and moves through the classes quickly and easily.

But the estate is shrouded in a veil of trouble – a gang war threatens the safety of those living in the flats and this world becomes another war zone for Dheepan. 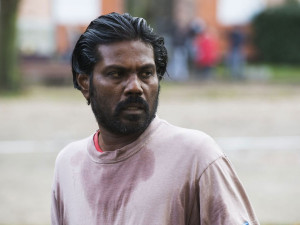 will do whatever he can for the safety of the only two other people in the world that he has grown to care for. The trauma of war in Sri Lanka is never far from his mind, and in the most intense and often the most troubling moments of the film, he relives the violence and terror of the unrest and soon the lines start to blur with his new life in Europe. At the same time, the film isn’t totally about Dheepan but also spends time with Yalini, watching how this new world has also affected her. She has lost her identity and her culture, whilst she may have gained a family – it also comes with all the responsibilities that a 20-something year old woman may not be ready for. She grapples with her responsibility to Illayaal, as a mother and carer and her relationship to Dheepan is ofter strained and unknowing – what are they really? In the end they become each others saviours – all three of them for each other.

Dheepan is unlike many other films that are made today, it’s often in the fleeting moments of the characters lives that the audience learn the most about them. This is storytelling at its very best.