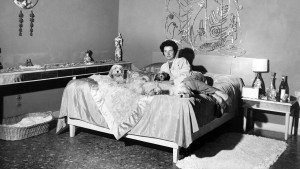 Peggy Guggenheim, one of the most important collectors of art has astounded and impressed generations of art fans, critics and artists. Her story, one of a young girl who grew up to become synonymous with figures including Samuel Beckett, Max Ernst, Jackson Pollock and Marcel Duchamp is not a straight forward one and is a somewhat unlikely tale but director Lisa Immordino Vreeland has created in Peggy Guggenheim Art Addict a fabulously smooth, shiny and important treasure trove of stories and archive footage to tell the Guggenheim story. Most importantly, she looks to the art itself to tell this tale and how this woman ended up becoming one of the most important cultural characters of the 20th century.

Art Addict follows the story from Guggenheim’s beginning and looks to her family; Guggenheim’s father, Benjamin, died in the sinking of the Titanic and he had not amassed the fortune of his siblings; therefore her inheritance was far less than the vast wealth of her cousins. But her inheritance allowed her entry and knowledge, she became part of the local bohemian culture and soon finds herself in Paris where she finds herself socialising with the likes of Man Ray at the start of the surrealist era. Guggenheim traveled for the rest of her life, often settling down for periods in England, Italy, France and America. 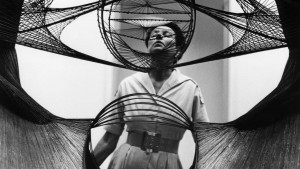 a variety of ways how taste and culture changed over time. Through interviews with those who worked with her, art historians who have studied her collections, thinking about the people that she was hanging out with at each point in her life and where in the world she found herself, Art Addict manages to illustrate the importance and multitude of her work. Without Peggy Guggenheim a huge number of some of the most famous artists of the 20th century (many of whom were seem as outsiders) would perhaps not have the names they have today.

Art Addict also doesn’t assume that the audience are well versed in art history, which was hugely appreciated by this writer. But instead the art is almost always used to illustrate what was in, what Peggy was looking for and what the more general cultural identity of this work was at the time. It’s beautifully compiled and clearly done with much love. Well worth a watch for art fanatics and cultural enthusiasts alike; Art Addict is a touching tribute to an incredible woman.