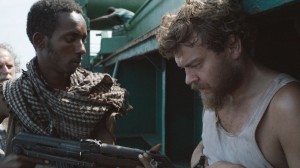 Most of the action in cargo ship hijacking thriller A Hijacking occurs over the telephone. The emotional stakes are set in the opening moments by a conversation between soon-to-be-hostage Mikkel (Pilou Aesbæck) and his wife and daughter, and later raised through a fraught and highly affecting second conversation between the two parties. That these two conversations occur hundreds of days, and about forty onscreen minutes apart, yet mark the only contact this family has is telling of the quality of control and construction present in Tobias Lindholm’s immaculately thought out thriller.

Following a fictionalised hijacking informed heavily by real life incidents through the stages of its negotiation, A Hijacking uses the figures involved in the incident over and beyond the actual event itself for its dramatic momentum. Indeed, the circumstances of the takeover are not even displayed, Lindholm’s camera staying resolutely in the offices of the ship’s owners at the time of takeover. Somalian pirates are in control of a corporate vessel of which Mikkel is the cook, and he and a translator Omar (Abihakin Asgar,) act as communicators for the demands of the pirates,  establishing a long running, increasing compromised dialogue between the captives suffering at sea and the executives safe on land.

Lindholm, writer of recent Thomas Vinterberg films The Hunt and Submarino, as well as Danish TV phenomenon Borgen, is a large player in the recent 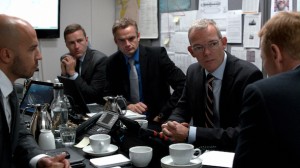 surge in the trendiness of Scandanavian drama. This, his second directed feature, (after his debut R, also starring Aesbeck) is very much a writer’s film, relying on controlled circumstances and tight scripting to maintain credibility and viewer attention. Shot on a cargoship that was the site of an actual Somalian pirate hijacking, and using a genuine hostage negotiator to play one in the film, as well as utilising a spartan documentary-style visual approach and volumes of research and interviews, Lindholm shows a fondness for detail and realism that is unusual in a genre generally reliant on grand set pieces that forgo believability in favour of thrills.

Equally unusually, Lindholm is careful to both appropriately realise and humanise all of the characters involved in the hijacking scenario. Providing a secondary human angle in addition to the familial one established in the opening sequence, Lindholm opens a loose moral exploration of the financial side of hijacking incidents by looking at the corporate side of the situation as much as the human story. With the CEO of the company who owns the cargo ship under siege Peter (Søren Malling,) Lindholm creates a character of conflict and ambiguity. Seen first cut-throatedly beating down Japanese businessmen in a bid war, he is pencilled first as the picture of the worst that capitalism brings. When he decides to handle negotiations himself, instead of employing a third party to handle affairs, his interests are assumed to be purely financial, but as the hijacking is drawn out, his motivations become less clear cut, and the emotional toll taken on him almost as  great as that upon Mikkel. Always showing both sides, financial and moral, corporate and individual, Lindholm encourages viewers to constantly ask themselves questions, and this reflexivity forms a large part of the film’s narrative momentum. 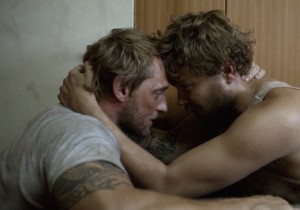 Whilst the pirate villains are drawn broadly as the kind of shouting, prodding stereotyped captors criticised in Michael Cimino’s The Deer Hunter, they are not demonized as much as in that film. In one of a few scenes that provide humourous relief from the intensity of the hijacking negotiations, the pirates are seen laughing and drinking with their captives. Lindholm again proves his skill in creating raucous drinking scenes, in a mess room laddish mug-clashing sing-a-long similar to the one shared by the old boys in The Hunt. Though whilst the singing in The Hunt is entirely jovial, the comradery between captor and captive displayed in A Hijacking turns sour when Mikkel turns to singing a solemn happy birthday for his daughter he has been away from for so long instead of ‘what shall we do with a drunken sailor’ with which the scene began.

With The Hunt and now A Hijacking, Lindholm has displayed a adroitness in forcing his audience to consider their own moral codes, exploring complex situations through tight narrative dramas. Further, the layers of emotional involvement elevate A Hijacking above its clinical, procedural format. As taut as the construction is, remaining tense and commendably well considered and plotted throughout, it is the explorations of the trauma induced and the moral conflicts raised that make it compelling. Making the perspective of the hijacking as much the office as the ship forces viewers to consider the value of money, of power and of human life, creating a tension beyond the expected thrills and spills of the usual hostage thriller.