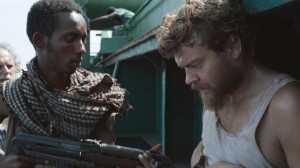 There are three kinds of cinematic pirates. The first are those who watch bootlegged films. They are almost the worst kind. Then there are the fun loving Jack Sparrows who are good-hearted rogues, at worst an anti-hero, at best a free-spirited role model. Then in 2013, thanks to that pesky thing reality, a new kind of pirate invaded the world of cinema – the Somalian pirate, a real life threat to merchant ships on the sea and, baring AK-47s and a sense of desperation, dangerous enough to make for some highly tense films. Out in cinemas at the moment is the much lauded Captain Phillips, and this will be the more talked about of the two films come awards season, but Denmark’s unshowy, low-key hostage drama A Hijacking is equally praiseworthy.

The authenticity of every single scene in A Hijacking is what makes it so nerve-shreddingly tense. The titular takeover happens off screen, the audience only learning about it via the CEO of the company that owns the vessel. What proceeds is a very dialogue heavy, action-free film where said CEO is torn between wanting to get his men home and the need to deal carefully with the pirates, interspersed with scenes of the crew gradually deteriorating under the pressure of being hostages. There are several scenes of sitting in a room looking concerned, yet the realism of such a drawn out, tiring process is what makes it work. The sound design contributes to this, as telephone feedback and the beeping of a dead line become ominous portents. Everything in this film feels lifted straight from reality without needing to resort to fake storytelling techniques, showing that often the truth is all you need to keep an audience on edge from beginning to end.

A Hijacking is out on Blu Ray and DVD now.