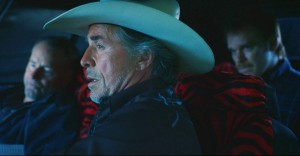 Jim Mickle’s Cold In July really has all the ingredients to go down as a great small town crime thriller; great performances from the whole cast, a killer soundtrack, clear direction, great locations, wonderful set design and an intriguing storyline… for the first half of the film but unfortunately as the film goes on it doesn’t quite realise what it had and descends into boys playing with their guns with a lack of any character motivation and unfortunately this small but vital point pulls the film away from the greatness that was just within its grasp.

Featuring an incredibly talented cast including Dexter‘s Michael C. Hall, Don Johnson (Miami Vice, From Dusk Till Dawn TV series) and Sam Shepard, Cold In July tells the tale of what happens when the walls close in around you after an unforgivable act is committed and suddenly everything and everyone around you is affected in the worst possible way. On a dark night, Richard Dane (Hall) awakes to hear someone has broken into his house. His first instinct is to grab his gun and make sure his family are safe; he leaves his wife in the bedroom and checks in on his young son before confronting the masked assailant in the living room. For a split second they stare at each other and when something falls, Richard reacts and cleanly shoots the man dead. The leading police detective on the case, Ray Price (Nick Damici) congratulates Richard on his bravery and closes the case telling Richard that they have been trying to track down the now dead criminal, Freddy, after his string of crimes. He also warns Richard that Freddy’s father, Jim (Johnson) has just been let out of prison.

Here is the height of the film, the tension that Mickle builds up keeps the audience on the edge of their seats; they are constantly wondering 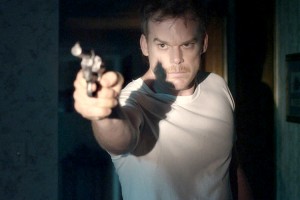 whether Jim is going to turn up and vindicate his son. The family go back to their day to day routine but something feels changed; Richard can’t live his days like before, not after he has killed someone and his wife, Ann (Vinessa Shaw) is finding people treating her differently as well. But the family push on and try to return to normal. They clean the house, wiping the blood from the wall behind the couch, which they replace, trying to get rid of this terrible memory. On cue, Jim arrives in town, on the day of Freddy’s funeral and bumps into Richard giving him a clear warning and a veiled threat. What follows is a expertly crafted and wonderful cat and mouse between Richard, the police and Jim, which ends in a climatic sequence when Jim breaks into their house to kidnap the young boy.

When Richard is told that Jim has been captured and dealt with, he can finally return to his life without another worry or burden but when he sees a wanted poster in the police station for a man with the same name as the man he killed, he starts to worry that the police aren’t telling him the whole truth. So when he follows Ray Price, his team and Jim onto the railway tracks one night, his entire life will change forever in the moment that he saves the man who has been trying to kill him and they must come together to uncover the police corruption, lies and the bigger picture about what has actually happened to Freddy, who may not be dead.

The second half of the film is where the story starts to fall apart; it turns out Freddy is alive but under the guard of a local gang who the police cannot touch. In turn Jim figures out that he has to teach his kid a lesson and decides to go on a hunt to find the boy that almost got him killed. He is joined by an old friend, Russel (Shepard) who helps him track Freddy down. Richard decides that he also has to join and in a throw away comment suggests it is because he needs to know who the guy he actually killed was. But for some reason he forgets this quickly, puts his family at risk and gets involved in a much bigger crime involving the gangs and sexual violence against women. 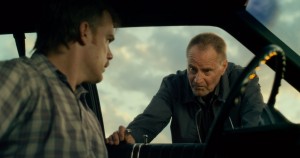 Whilst technically, Cold In July is beautifully shot, carefully exploring all the locations that the character find themselves in. The camera feasts on the actors themselves and bathes in warm glow of the violence on screen. Taking a note from recent Nicolas Winding Refn like Drive, Cold In July makes the violence beautiful and haunting at the same time. In several shots, blood splatters across the screen but it is almost poetic rather than gratuitous. The soundtrack, also reminiscent of Drive, is a thrilling kick back to 80s synths and electronica, which also stands out against the Texan backdrop actually adding a whole new layer to the film. The performances are really strong, especially between the central three characters who have great chemistry and it really is interesting to explore the changing relationship between Richard and Jim as the film goes on.

The twists and turns aren’t that predictable but unfortunately stand out like a sore thumb as they contrast almost too greatly to the first half of the film. The pacing changes and it becomes altogether too unpredictable. Whilst the tension is constant and tight, as a thriller it just seems to lose interest because there is no reason why most of the characters do what they do as the film goes on and instead it just seems like the story loses any ground it may have gained to begin with.

Whilst Cold In July is an expertly crafted film, it severely loses its way but there is no reason to lose hope. Director, Jim Mickle has shown both with this and his previous film, We Are What We Are that he is expertly aware technically and perhaps next time, just needs a tighter story to work with.