What Richard Did Review
Home
Reviews

What Richard Did Review 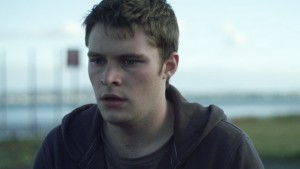 Like those films, which came before it What Richard Did, is a far from sensationalist look at what happens when violence happening within youth gets out of hand. It was only back in 2011 when Lynne Ramsey’s We Need To Talk About Kevin hit our screens, based upon the Lionel Shriver novel of the same name. Ramsey’s adaptation of the frighteningly dark novel saw Ezra Miller take down school children after proving to be an excellent archer. In turn this represented issue which are unfortunately seen too often in the American school system today. The film (and book) in turn raised questions surrounding youth crime and the easiness of being able to get hold of a gun (for example) but it also captured a tense moment in time when questions about parental supervision and blame were being asked.

Lenny Abrahamson’s Irish drama brings the audience back to zero by taking away the fancy cinematography and the sustained tension and even the guns, but instead is a discovery and exploration of what happens to one boy when it all towers over him. The film is a albeit brief, but highly skilled look at the aftermath of a terrible crime in the jilted and misguided lives of these Irish youth.

Set in a wealthy, contemporary Ireland, What Richard Did, is based upon the novel, Bad Day In Blackrock, by Kevin Power, which in itself was a fictionalised account of what happened when a group of Irish schoolboys beat a man to death outside of a night-club. The audience find themselves in the middle of a group of young jovial teenagers who have just finished school and are due to make the transition into university – but first they have the summer to get through. We primarily follow Richard, who is played by newcomer Jack Reynor (who already shows signs of being a new Ryan Gosling) as he humbly frolics around with his mates. He is a boy who wants to have fun, but also is more than aware when things have crossed the line. He is morally above board, and this is shown when a young female friend of his is being disturbed by another lad – he puts an end to this unwanted sexual advance and saves the day. Richard has a close group of friends, and he appears to be liked by everyone around – he likes a drink and a good laugh.

Even before the main bulk of the story starts, it is interesting to note the deep emotion and feeling of loneliness that Reynor plays Richard with – despite always being surrounded by people, he looks alone. Things turn when Richard meets Lara (the simply beautiful Roisin Murphy) and he instantly starts to create an emotional attachment to her. He continues to present both the audience and the characters around him with this cheeky chappy persona, and someone who could do no wrong until an altercation between Richard and Lara’s ex, Conor. In this small, and underwhelming sequence, Richard doesn’t realise that an out of character, act of violence would near enough destroy the small world he had created around him and possibly haunt him forever.

What Richard Did is Abrahamson’s sonnet to a comfortable community ripped apart by an indiscretion; this subtle, beautiful 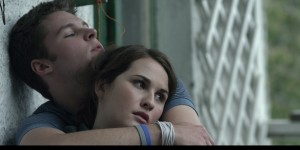 piece slowly becomes a disturbing portrayal of a world at war with itself.

Whilst it is infinitely clear from the moment of Conor’s death what has happened, What Richard Did offers one of it’s most interesting questions in the silence of the characters. Is it right to cover up what happened to cover your own back, to cover those close to you and just to let the news pass by? It is no secret what happens and yet the small community of characters are slowly torn from each other; either due to guilt, compassion and worst of all because of suspicion. As the days pass by from the murder, and no one comes forward, the town becomes more and more bleak as the characters flee away from Richard and at the end he is left alone with no one to help him.

Two particular scenes were outstandingly beautiful in the ways they were shot and written; one was the scene when Richard admits to his father, played by Lars Mikkelsen (The Killing star in his first English speaking role) what happened. His father doesn’t know how to react and instead spends a long time without speaking. The scene is shot in the garden, but the film gradually gets darker as it goes on and the world looks like it is about to swallow Richard whole. During this entire sequence the camera is very still and close to the characters – we get a feeling of claustrophobia and intimacy – we both want to get to know Richard, want him to escape but also understand that he should feel barred in this world where he has done something wrong. His father suggests some time away from his family and the community – and this is the most emotionally compelling of all; his own father is confused as to what his fate should be and leaves it with the teenage boy.

Another scene is during Conor’s funeral, his mother stands up and speaks to the community about what has happened and asks why hasn’t anyone come forward with any valid information? The performance is tantalising and once again, the audience is called to question whether they want Richard to get away with what happened or whether he should give himself in. 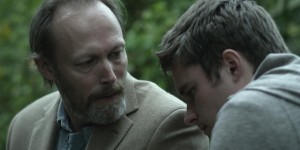 Ultimately, this was my biggest love for the film – I was drawn between morally saying that Richard should give himself in but also that I wanted him to get away with it, he is too young and has his whole life ahead of him and what happened with Conor was an accident. Should he lose everything because of one horrible night, or should he learn from it? This question was represented in the many facial exchanges between Richard and those around him; so much of the film is based upon what isn’t said and that adds to the highly emotional drama, which defines the film. Reynor is both emotionally haunting and forgiving, displaying such raw emotion on his face, only to give into his own self loathing.

I believe What Richard Did is one of the most important teen dramas of our generation, asking so many important questions in an age where morality and ethics seem to be in a stale tension. It is during our teenage years that we experience those things, which mould us forever and this highly skilled example of filmmaking has shown some of the most brilliant work to have come out of Ireland in years.