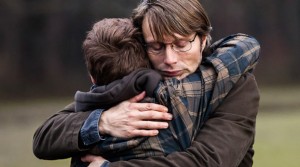 As a member of the Dogme 95 movement, established in 1995 along with Lars Von Trier, Thomas Vinterberg’s goals were to create films based on traditional principles like storytelling, acting and theme and discount the use of modern effects or technology. Although the beginning of that historic filmmaking movement is now 17 years old Vinterberg proves with his latest film, The Hunt, that these values are still integral to making gripping cinema, whereas the technology is not. Vinterberg has broken the mould slightly by including music in this film, a fitting and haunting score by Nikolaj Egelund, but rules are made to be broken though his staunch attitude to filmmaking is still intact. The Hunt is one of the best films this year and proudly takes its place in Dogme 95 canon.

Lucas (Mads Mikkelsen) is a former high school teacher who is now working in a nursery after being made redundant. With the kids he is effervescent, full of energy and good humour but at home there is little solace from having lost his job due to the closure of the school and his recent separation from his partner and thus his teenage boy Marcus (Lasse Fogelstrom). Things seem to be turning in 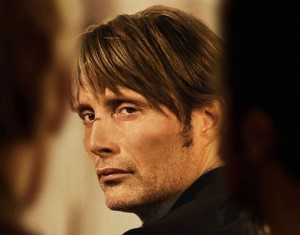 his favour when his partner agrees to let Marcus live with him but there is much darkness looming on his horizon. Klara (Annika Wedderkopp), the daughter of Lucas’ best friend Theo (Thomas Bo Larsen), accuses Lucas of exposing himself to her. The closeness of their relationship and her lack of understanding of the situation cause the accusation to get completely out of hand, leaving Lucas with the long and arduous task of clearing his name. He has his work cut out, for he finds that in small town Sweden, mud, once cast, sticks.

The setting is eerily perfect for this tale. Although it is more common to see stories about the closed mindedness of small town USA, the isolation and quiet of forested Sweden is suffocating. Vinterberg and co-writer set their scene by portraying the tight knit community; the adults know each other intimately. They know each other well enough to know that a twitch in someone’s eye means they are lying, they have lived, worked and loved together for years. This warmth and friendliness transforms into a cold front once the rumour mill begins to turn for Lucas.

Vinterberg cleverly twists the mood of the film by changing Lucas’ dynamic with the children. Children seem to lurk in the shadows 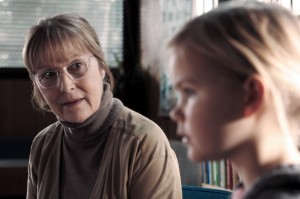 like antagonists, what was previously innocent hand holding becomes something altogether more sinister. This is not an exploration into paedophilia or any of the surrounding issues. That can be found in Markus Schleinzer’s intense drama Michael (2011). This film quietly exposes the dangers of working with children and how a tiny imaginative mind can destroy a life in a hugely cataclysmic way.

The handheld cameras and insistent focus on Mikkelsen’s magnetic performance give this film an intense power. The movement of the camera becomes volatile as does Lucas’ relationship with the townsfolk. There are mental and physical walls built around this town and once you are outside, it may not be possible to re-enter. Lucas crashes into these walls at full force as this nerve shredding piece of work enters a magnificent climatic phase without ever flirting with melodrama. 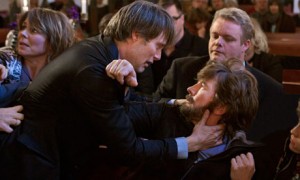 lists. A frighteningly real exposé of how a casual relationship with the truth can become one man’s nightmare. It is a superbly engrossing tale of the nature of friendship and casts aspersions as to whether or not it is ever possible to truly clear one’s name. Lucas’ hunting buddies become those who throw him out onto the street with callous hatred; their minds are made up without allowing him a moment’s explanation. The Hunt only needs just shy of two hours to convince you of its awesome power, you won’t need to wait around for any convincing.