Anne Hathaway on Catwoman in The Dark Knight Rises

LA Times have finally cracked the surface of Christopher Nolan’s The Dark Knight Rises, the forthcoming finale to his Batman trilogy starring Christian Bale, Tom Hardy, Anne Hathaway, Gary Oldman & Michael Caine with an interview with the new Catwoman herself, Anne Hathaway. Beware, the interview may contain some spoilers about upcoming scenes in the film but otherwise, it’s a pretty interesting read. For the full interview, click here.

“Gotham City is full of grace,” says Hathaway. “You look at Heath’s performance as the Joker, there was a lot of madness there but there was also a grace and he had a code there. There’s a lot of belief and codes of behavior in Gotham and my character has one, too. A lot of the way she moves and interacts with people is informed by her worldview. Chris has given us all such complex, defined, sophisticated worldviews that it’s just a matter of doing your homework and getting underneath the character’s skin.”

“I really got into the comics after I was cast,” she continues, “and I like that when she made her first appearance she meets Bruce Wayne and says ‘Let go of me or I’ll claw your eyes out,’ and he says, ‘Careful, claws in or papa spank’. So I’m glad we’ve come a long way since then. I’m not saying anything against Bob Kane, though!”

And speaking of previous incarnations of the character, Hathaway isn’t remotely concerned by comparisons to Michelle Pfeiffer et al. 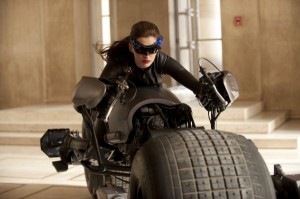 “What’s come before doesn’t limit or even affect this new version,” she says. “It doesn’t affect me because each Catwoman – and this is true in the comics as well – she is defined by the context of the Gotham City created around her. Catwoman is so influenced by Gotham and whoever is creating Gotham at the time. Michelle Pfeiffer’s Catwoman was informed by Tim Burton’s Gotham and Eartha Kitt was informed by Adam West’s Gotham. You have to live in whatever the reality of the world is and whatever Gotham is.”

Still more intriguing is the description of a scene that precedes the interview in the LA Times. Eyes away now if you don’t want to know what happens…

“Gotham City is a war zone,” begins the description. “A ruthless madman named Bane has ripped away any sense of security and the citizens, haggard and clutching suitcases with refugee anxiety, sit behind barbed wire waiting to see what will blow up next. A hooded prisoner is dragged in – it’s Bruce Wayne, one of Gotham’s most famous faces – but the eyes of the crowd go instead to the woman in black standing at the top of the staircase.”

“‘Sorry to spoil things, boys, but Bane needs these guys himself,’ says sultry Selina Kyle, played here by actress Anne Hathaway, navigating the steps with stiletto heels that, on closer inspection, turn out to have serrated edges capable of leaving nasty claw marks in a fight. She also wears high-tech goggles that, when not in use, flip up and resemble feline ears.”

So Bane and Catwoman are working together? Make of that what you will. The Dark Knight Rises is released in the UK on 20 July 2012