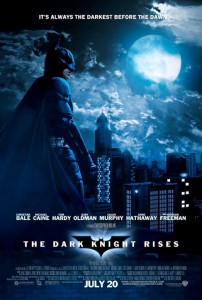 It seems that in recent months, whilst the Avengers Assemble, and Joss Whedon hogs the comic adaptation spotlight, Christopher Nolan’s Batman had been sent back into the shadows – and not the good, Gotham kind. In the wake of Avenger’s success, Nolan’s competitive streak has begun to shine. Whilst Marvel bathe in their flood of glory, the third, and perhaps final trailer to Nolan’s last effort at adapting DC’s Dark Knight restores the Caped Crusader’s position as the headline grabber.

With footage from the prologue, which saw thousands flocking to their nearest Imax just a few months ago like some religious pilgrimage, the new trailer had more to offer in way of promoting a spectacular trilogy-topper than that of its earlier efforts. For one, Bane’s voice will no longer require subtitles, as post-production ironed out the aural wrinkles. The narrative unfolds as Bane’s role shapes up, the demise of Batman is set in question, and Michael Caine’s Alfred looks like he will be getting his hands dirty. However, the list of trailer-treats does not seize there. A lot more is on show in terms of the explosiveness that we all expect from a high-concept Warner Brothers Blockbuster such as The Dark Knight Rises.

One thing that is somewhat still held in contention is the focus on Anne Hathaway’s Catwoman. What do we make of Miss Kyle, why has she taken center stage? Her sullen, slightly malevolent and yet ambiguous voice introduces us to what ends up being a remarkable episode of marketing. She stamps her authority on the franchise-finale as her voiceover, “a storm is coming” compliments an aerial shot of a depressed city. Wait… Is Nolan feeding off the worldwide success of Game of Thrones, in echoing its motto, “Winter Is Coming”? Either way, one thing’s for sure, Nolan knows the stops to pull out, and at what time to start pulling, as he demonstrates his superiority and snatches back his crown from the vice-grip of Whedon’s Hulk.

With the theatrical release just shy of three months, the anticipation has never been so intense. We are all eager and waiting, but correct me if I’m wrong, there’s that little voice in the corner, one that we often ignore, that suggests this epic conclusion may not turn out to be so epic after all. I mean, can Nolan really top the Dark Knight? Can Hardy, as brilliant as he is, ever top Ledger? And I guess, most importantly, can The Dark Knight Rises top the box office? Hopefully, Nolan has not submitted himself the hall-of-lamers who take advantage of the sure-fire financial success, feeding off the merits of previous attainment. Although admittedley, Bale pronounces in the trailer, we have not been given everything…not yet.