The first image of Anne Hathaway’s Catwomen costume has been released via the official website for the widely anticipated The Dark Knight Rises, which is set to be Christopher Nolan’s final Batman movie. 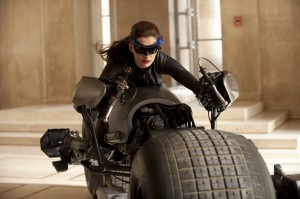 Anne Hathaway is taking the role as Selina Kyle and her costumed alter-ego Catwomen, the exact relationship to Batman in this film is unknown, but from this image it can be speculated that she will ally Batman. Of course Catwomen in the Batman universe is both villain and ally.

So what are peoples thoughts on the new Catwomen costume? Do you prefer it to previous cinema incarnations? Or do you love the new tactical realism this version has brought?