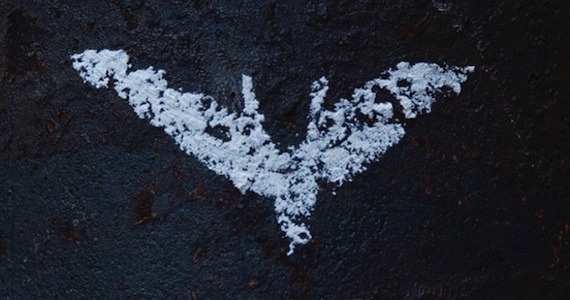 “Sometimes a man rises from the darkness” – Christopher Nolan’s epic trilogy-topper gives us a Knight to remember.

We often turn to superhero movies to find hope and security in a world filled with terror and uncertainty and to bring stability to our otherwise unpredictable lives. However, The Dark Knight Rises is so much more than just a superhero movie.

As a way for Nolan to up the anti in his “biggest film undertaken so far”, he sends his last Batman instalment into disaster territory, as a nuclear threat looms large. We re-join Batman’s story eight years after he took the wrap for Harvey Dent’s murder at the end of The Dark Knight. For those eight years, Gotham City has been a safer place and the now frail Bruce Wayne has been living in solitude; until of course, the biggest threat he has ever known emerges from the depths of hell. Bane. 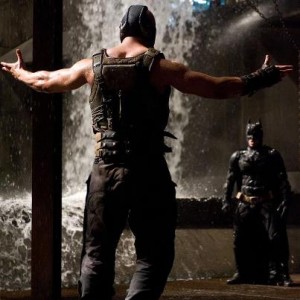 Rises remains reasonably loyal to the Knightfall comic with regards to Bane’s backstory, although without revealing too much, Nolan induces a typical sleight-of-hand twist and by its end, goes Inception on us.

Bane releases every criminal back onto the streets of Gotham, including Cillian Muprhy’s Scarecrow, and recruits them into his vast army of thugs in order to reduce Gotham into a pile of ashes. One thing that was on my mind was the whereabouts of the Joker, as The Dark Knight simply leaves him suspended in mid air, very much alive. Understandably, it is a sensitive matter and it is fair that the character would not be re-cast from a Nolan perspective, (besides, there’s little room for two psychos in Rises anyhow), but I was expecting some sort of explanation for the absence of Mr. Hysterical, simply to complete Nolan’s circle.

We all know that a comparison between the Joker and Bane is inevitable, despite the fact that one is perhaps not needed. Both villains so desperately want to watch the world burn, and both The Dark Knight and its sequel allow the nemesis to steal the show. In a sense, Rises becomes a Bane-parade. Not only does he dominate with his overbearing physicality and strength, he also demands the majority of screen-time, as the genius brute is very much in control.

With such exquisite rendering of character from the brilliant Heath Ledger as The Dark Knight’s Joker, I asked myself, could Tom Hardy’s Bane top that? I soon interrupted my own trail of thought and averted to the question, does he need to? They are both excellent at filling the boots of a psychopathic terrorist, both committed mentally and physically and for those reasons, it would be unfair to oppose their efforts. 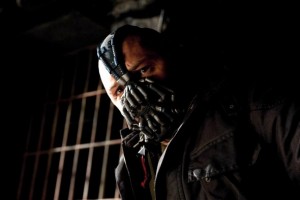 Hardy’s acting is limited by Bane’s impressive mask. As he speaks, Hardy’s naturally grainy vocals are distorted. They become muffled yet amplified as the sullen sounds reverberate around the auditorium. Whilst on the subject of Bane’s voice, it was sometimes inaudible during some of the lengthy speeches, but not to any detrimental degree.

By covering the majority of Hardy’s face, his possibilities for expression were reduced to his eyes and to his body. That being said, Hardy makes up for those physical restrictions. The menace he holds within his eyes is dangerous as just a look fills his enemies with fear. Returning to his Bronson physique plus-some, Hardy carries his gait with a brutish demeanour and his gestures are directly angled towards inflicting terror. Trained by the same League of Shadows as Bale’s Batman, Bane, despite his bulk, moves with such speed and accuracy, resulting in the ultimate machine fit for taking down the caped crusader.

By being a Christopher Nolan film, the music is of course on a grand scale. The extravagant soundtracks composed by Hans Zimmer often overwhelm us and Bane’s mystical chant, Deshi Basara, meaning to rise, energises the scene and transports the action to an all-new level. 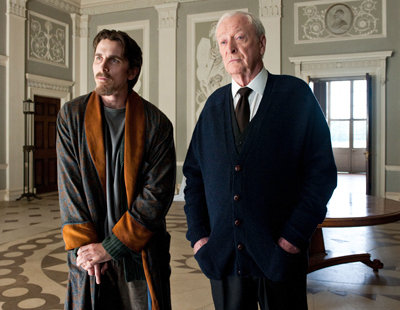 Michael Caine gives a very touching and heartfelt performance as Alfred and Anne Hathaway certainly has an aptness for Catwoman a.k.a Selina Kyle, despite my initial disappointment in her casting. Her swagger and seductive intonation of speech left me no less than impressed. Joseph Gordon-Levitt as the rooky cop grows in maturity and becomes one of Rises most humble and esteemed characters. I could continue by highlighting Gary Oldman’s continued efforts as the commissioner, but what I have to say would come as no surprise. 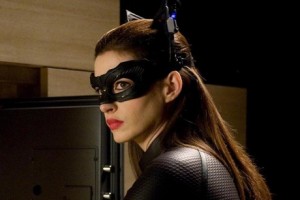 This final chapter definitely felt like the end. Although its runtime is approximately 164 minutes, The Dark Knight Rises is only as long as it needs to be. There is no padding and the story unfolds in its own time – unlike The Dark Knight, where the plot seemed to somewhat anticipate its own ending, as great as it was.

One thing you may notice about this release is its suitability for D-Box/MFX technology, where action becomes motion. Sound like a distraction to you? In declining the opportunity to undertake the experience of electronic seats myself, it seemed that those who favoured otherwise grew rapidly frustrated with such novelty. I couldn’t imagine anything worse than my seat moving vigorously, when all I want to do is focus on the spectacle without having to worry about the next time I was going to be thrown from my seat – after all, if I wanted to be chucked about, I’d go to a theme park.

It seems that we once again find ourselves in a situation where we ask, is this really it? It is painful to see the back of Nolan and indeed of Bale. But the legacy they leave behind is none short of outstanding. The trilogy grew in scale, and mounted into an amazingly satisfying conclusion.

Too many films fall victim to the Hollywood convention of closure by forcing a single conclusion. However, with Nolan’s The Dark Knight Rises, it can be whatever we want it to be… and so, people talk.

Has Christopher Nolan given us everything? If we were to believe Bale’s Batman, the answer would be no, “not everything, not yet.”