July 20th 2012, that date is currently etched in pretty much every movie-goers memory. Forget the London 2012 Olympics, forget the ‘predicted’ end of the world… no, instead, make sure you are ready for what is to be predicted the film of the 2012, Christopher Nolan’s (Memento, Batman Begins, The Dark Knight, Inception) The Dark Knight Rises.

The final (or to be thought) Batman film which Messieurs Nolan will be taking the helm over is already creating quite a buzz online and for good reason. The Dark Knight Rises is going to be big for several reasons, some you may agree with and others may not be so important. But with the release of the latest Batman film (the superhero franchise is name alone to be a box office smash), helmed by Nolan (who could be the best Batman director?), following Nolan’s last (amazing) dream-bending picture, Inception, creating a sequel to a film which brought us Heath Ledger’s perfect performance of the Joker and starring a cast which currently includes Christian Bale, Michael Caine, Anne Hathaway, Joseph Gordon-Levitt, Marion Cotillard, Juno Temple, Josh Pence, Daniel Sunjata, Diego Klattenhoff, Burn Gorman, Nestor Carbonell, Gary Oldman, Morgan Freeman, Matthew Modine and Tom Conti.

Over the past few weeks, pictures have emerged online (here), videos have been released on the internet of both the filming of The Dark Knight Rises and the start of a viral campaign (you remember The Dark Knight’s amazing web presence?). Well the latest in what is looking to be a line of fantastic advertising has popped up, in the shape of a teaser poster. 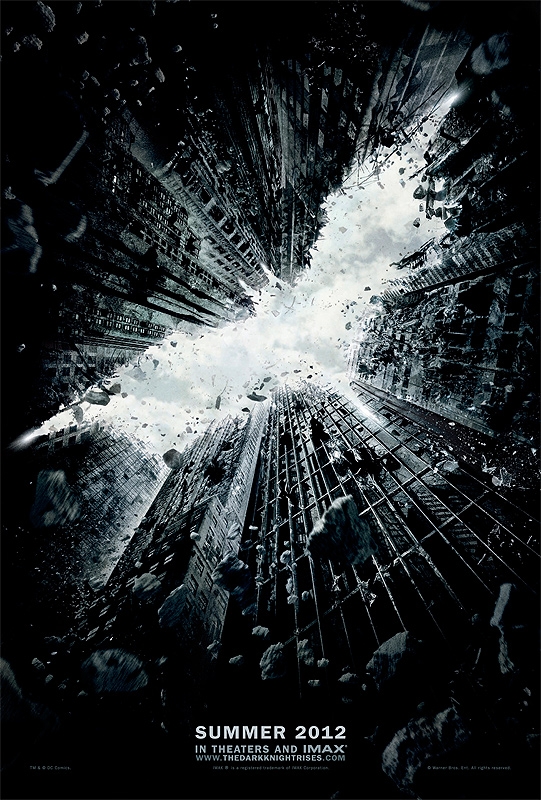 What is going down in Gotham?

What does this poster show us, which is going to help us try and piece together some sort of narrative strand?  Destruction in Gotham as shown through the traditional Batman logo; a juxtaposition between evil and good perhaps? All I know is that Nolan isn’t going to leave the franchise sinking and will indeed go out with a fang (see what I did there?)…