Nebraska, one of those states you can’t put your finger on unless you’re looking at a map (and even then it may take a while). Florida, New York, California all come with pre-wrapped expectations: sun and sand, New York New York, and Arnold Schwarzenegger; but Nebraska is largely a blank. And that works for this film, as Alexander Payne’s latest is about a lost America, a place strangely devoid of the life it should have. 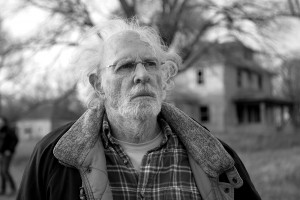 Woody (Bruce Dern) is out on his own. Coat flapping, cotton wool hair torn apart by the wind he walks along the great American pavement (or highway as it’s better known). Woody has purpose, he’s off to Nebraska keen to collect the million dollars promised to him in a letter. But he has ignored the small print; the letter is just a circular. Woody’s no millionaire, he’s just a deluded old man.

Horrified by his antics his wife Kate, a lady full of grouch with a foul mouth to match, calls in son David for help. But David is ill equipped for this task, his life ain’t going so great and he’d rather not deal with this old man who never did much for him. Woody’s having none of it, he’s going one way or the other, maybe a road trip to Nebraska is just what David needs.

This being Payne Nebraska is no ode to the open road but instead a chance for these characters to get to know each other. Woody and David get diverted on the way and literally stuck in their past – back in the small town where they once lived. The shadow of recession looms large here. There is nothing much happening in this town beyond beer and TV; the streets lie empty and forlorn in the hope tumbleweed may provide some excitement.

They stay with relatives who all seem stuck in arbitrary lives. The mum fusses pointlessly, the dad sits watching TV along with the two fat sons who may as well be called Tweedle Dee and Tweedle Dum. A beer in their hands they all seem happy to wait for the apocalypse. For David you can see the creeping horror, this is what happens when you get caught in the flow of everyday poverty. Meanwhile word gets around of Woody’s fortune and excitement spreads. We see the stink that money brings, the praise heaped on those who have it and the base instincts its lure encourages. 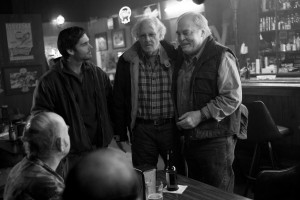 As time slips by David learns more about his dad’s past and his view starts to change. Maybe Woody is less a drunk that’s lost his marbles and more damaged goods after living a life too open to abuse in a cynical world. There is pathos in Woody and this is down to Dern who holds the screen beautifully with his usual mix of unpredictable magnetism. He’s aided by the casual evil of Stacy Keach (who plays his nemesis Ed Pegram) and understated support from Will Forte as David.

This is the first of Payne’s features not to be written by him and yet Bob Nelson’s script is not only based in Payne’s home state but fits right in with his output. There is a sadness in Payne’s work, a disappointment with people in general but also a willingness to care for them and laugh at their foibles.

Nebraska moves at a casual pace and has the solid feeling of a well crafted film but there are missteps. Scenes are played flat and slow which can lead to deadpan delights but when the acting falters proceedings soon become stilted and lifeless.
This is a gentle and effective comedy but you may yearn for the bite of Payne’s sharp debut Citizen Ruth, a film that starred Bruce Dern’s daughter Laura.