War is Death. Hell is Pain. Chess is Victory. 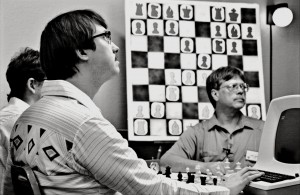 Early in Computer Chess, after a particularly exciting game, the chess champion announcer states repeatedly that the play style of one programmer’s computer is oh so ‘idiosyncratic‘, putting such emphasis on the word as to connote a kind of gleeful wonder at this profound weirdness. His state – simultaneously in awe whilst utterly confused – is an image fitting for mumble mainstay Andrew Bujalski’s latest and greatest film.

The film is imposingly, consciously odd, but it is also one of the most astute and well realised portraits of a subculture ever put to cathode ray tube (more on that later.) The culture of the programmers, who in the 1980s, an era of massive computers and even bigger uncertainty (“640k is more memory that anyone will ever need on a computer” – Bill Gates, 1981) struggled to code a machine that could beat a human expert at chess. Understandably, other struggles of the time probably received a little more attention. But to these clip on tie and pocket protector wearing gentleman (and in Bujalski’s film, as a point of great excitement and apprehension, one woman (!)), it was a task as worthy of all-nighters and lost weekends as any. Bujalski taps into this world of peculiar obsessives, and paints it warmly and believably.

Theirs is the kind of culture that is easy to either mock, or misinterpret entirely, but Bujalski’s nostalgic representation, whilst frequently fun-poking, feels like an insider perspective. He is happy to run gags at the expense of his nerds – a sequence with one of the younger programmers fumbling his way first around an encounter with a pair of free-as-the-birds swingers, and then a bored looking prostitute gathers big laughs from the kid’s archetypal virginal awkwardness – but for some reason it feels fair. The swingers, in their completely absurd brand of free love, complete with sleazy dressing gowns and over zealously lusty wife, are as much the butt of the joke of the programmer. Above all, Bujalski seems to be on a level. These are his people, he is allowed to jibe.

Computer Chess charts the course of a one weekend convention with an attention to detail worthy of the admiration of its obsessive characters. There is an aesthetic commitment to ugliness that matches Pablo Lorrain’s recent No. Like No, Computer Chess is shot on a pointedly grainy 1980s video formats. And like in No, its an aesthetic marriage to content that feels absolutely necessary, elevating even.  This is the 1980s, filmed with the tools of the era, and as a result it feels something like a documentary, found footage of real nerds of the 80s. That the techniques are matched by flawless set design (a lot of big computers on wheeled tv stands) and costuming, creating an entirety that is immersive and complete feeling.

Further, Bujalski perfectly captures the parallel importance/irrelevance of its situation. That the ‘work’ these people are doing is both utterly inconsequential and part of great technological advance. In one scene – one so perfect you’d never think of it – whilst the programmers pass a joint and talk utter nonsense about computers and chess  one brings up the possibility that his research is being monitored by the FBI. His paranoic concerns prove prescient (not only because of the NSA scandal) but because later, over a drink at the hotel bar, another programmer explains first that the government has been watching them, and second how his computer is sentient and dangerous, responding to his inputs with questions rather than answers. Profound, metaphysical questions. It’s a hilarious moment, but also a sinister one. This kind of surrealism / absurdity runs through the film.

Before this, the programmers at one point are forced to share convention space with a cult new-age group who are out on a weekend retreat to find themselves. As the chess master faces off against the winning machine, the new-agers make noises and touch each other behind. “Do you have no respect at all?” shouts the chessmaster absurdly. These people, working on their ‘computers’ in some ostracised mid-western motel exist so far outside of just about everyones radar. They (and Bujalski’s film about them) couldn’t be anymore niche, and yet anymore interesting because of the outsider status. At another point the new-agers draw an unwitting member of the chess group into a rebirth dance, making the nerd push himself through them like a baby escaping the womb. He doesn’t find himself born again as a result. The disparity between the two groups, one of rigorous logic and sequence, and the other of faith and freedom, makes for well observed comedy.

To talk just of the comic value of Bujalski’s misses a large part of its whole though. The director describes it as an ‘existential comedy,’ and with this first he imparts a distinct amount of weirdness into his otherwise conventional minor-scale comedy, before allowing the weirdness to oversaturate the comedy entirely, leaving the thing thing lingering on a point of indescribable singularity. In this regard, Computer Chess is comparable to another no-budget indie comedy, Alex Ross-Perry’s The Color Wheel, in that both trace a path of relative conformity (a familiarity with traits of mumblecore comedy) before collapsing in on itself. Where The Color Wheel turns to unexpected subversiveness, Computer Chess falls into formal and literal decomposition. Frames melt and fade away, sound loses sync, it even turns inexplicably to messily processed colour at one point. Its as if the 1980s as document is falling apart onscreen. The precision of computer programming colliding uneasily with the surrealistic and ever altering actuality of the altogether more fallible human memory, resulting in a kind of aesthetic and narrative combustibility.