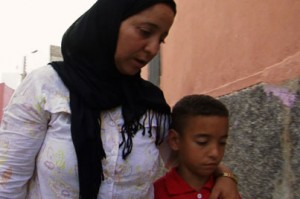 Camera/Woman is a new documentary from filmmaker Karima Zoubir which has recently been screened in London as part of the Human Rights Watch Film Festival. Aside from this and maybe a couple of other festivals, it will not be widely distributed and will therefore not reach a large audience. This is a shame, because its message is still hugely relevant.

The film begins by introducing Khadija Harrad, a middle-aged divorcee living in Casablanca, Morocco. She supports her family by filming wedding videos; the audience is told that it has become increasingly common for the bride to request a camera-woman to record the women-only pre-wedding festivities. She does this much to the disdain of her family who are ashamed, not only of her divorce (which, in the eyes of society, equates Khadija to a prostitute) but also of the fact that she earns a living by staying out late at night. An early argument between Khadija and her mother tells the audience all they need to know about Moroccan society’s attitude towards working women.

Some interesting choices have been made by Zoubir in terms of both style and content. Camera/Woman has none of the stock-footage expository sequences that have come to define mainstream documentaries. This is probably due to the budget, which was clearly incredibly small (Zoubir does, however, make the best of it). She also chooses not to interact with, or comment on, any of the women in the film; there is no voice-over, she never prompts them by asking questions and they never speak directly to the camera.

By ignoring these staples of the genre, this becomes a film that blurs the line between documentary and fiction. The sections which show Khadija filming the wedding celebrations are quite uplifting – she is clearly passionate about her work and delights in the fact that she is able to support her own family, rather than relying on a husband. More importantly these sequences are fascinatingly authentic, providing an inside-look at a culture that is rarely presented with this level of truth. However, there are definite moments where Zoubir’s technique strays away from the candid. Occasionally the editing together of a scene, the multiple camera angles, or simply the nature of the events occurring, all point to an obvious staging.

The exposition is handled via a series of conversations with family members and acquaintances and these all feel false, mainly due to clunky sounding dialogue (which in fairness may be a result of poor subtitling). But despite the fact that cinematic technique and uneven dialogue betray moments of fabrication, Zoubir achieves with the women exactly that which Roberto Rossellini set out to do 60 years ago and what many independent film-makers have been doing ever since: the ‘performances’ (if you can call them that) approach complete naturalism and this gives the film a real power. It is perhaps for this reason that the film’s sentiment remains convincing, even when the action feels contrived. 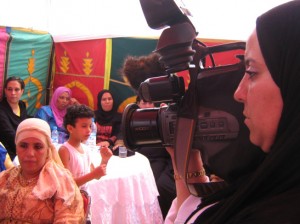 The most interesting trait of the film is its subtext. The difficulties facing the female protagonist Khadija, almost certainly mirror the difficulties that Zoubir must have faced in making the documentary. This actually becomes the most rewarding mode of reading the film; during some of the obviously staged conversations, one is suddenly aware that everything that’s being discussed has also affected the woman behind the camera and Karima Zoubir herself becomes the film’s subject. 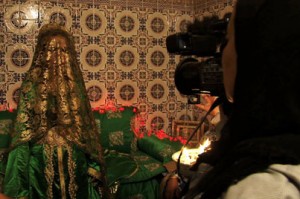 Of course, living in Britain where massive strides are constantly being made in the name feminism, it’s easy to forget the dire state of women’s liberation in other parts of the world. It therefore has be argued that, although this is a subject that cinema has perhaps dealt with more successfully, Camera/Woman is part of a subgenre that is still genuinely important in educating people about the kind of societal oppression that many women are still suffering under. As a piece of cinema Camera/Woman will not endure the test of time, however as a piece of film-making the obvious trials faced during its production mean that its existence alone is a considerable accomplishment.
As a political and cultural polemic, the underlying message proves that films like this are still vital – for this reason alone, Camera/Woman deserves to be seen.