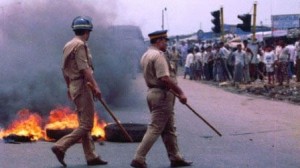 14 years in the making and over three hours in length, Indian social action documentarian Anand Patwardhan’s latest film Jai Bhim Comrade is an ambitious, sprawling project that demands attention despite its latent inaccessibility. Using a 1997 police shooting of 10 unarmed protesters as a jumping off point, Patwardhan weaves a dense tapestry of the injustices of modern India. Following the path of friend and singer/poet Vilas Ghogre, who committed a symbolic suicide shortly after the shootings, Patwardhan explores through this expansive portrait, how caste exploitation continues in modern India much as it had thousands of years prior.

Ghogre, a Dalit (lowly or ‘untouchable’ caste, below even the working class) was so
wracked with grief and depression over the state of affairs for India’s lowest citizens that he hung himself adorning a blue headscarf, the symbol of the Dalit. Patwardhan champions his music and that of countless other Dalit protest singers in a documentary where music features as heavily as interviews. Using the songs of Ghogre and others to soundtrack his statement, as well as cutting between many different performances, Jai Bhim Comrade is perhaps too reliant on the musical. Scenes that show atrocities soundtracked by Ghogre’s ghostly voice have a great potency to them, but some of the more plainly presented concert footage becomes overbearing and repetitive and it is hard often to discern the point of their inclusion, other than to celebrate the voice of this scene.

Thankfully, there is more to the film than music. Jai Bhim Comrade is a multifaceted documentary, cutting a cross section of the Dalit
community in India in order to paint a picture of a broad and concerning situation. Patwardhan follows several court cases relating to the issue of Dalit oppression, including the charges pressed against the officer in charge of the 1997 shootings (whereby a guilty charge was recently reached, yet the officer remains free,) and speaks to an assortment of Indians of all societal positions in order to try to understand where Ghogre’s depression came from. He exposes how the barely disguised corruptions that run through Indian society often relate directly to caste-prejudices, and how age-old ideas about birth instated superiority persist and shape contemporary existence. At the most extreme, upper-caste members go from making shocking announcements of genetic superiority, to openly admitting in the belief that Dalit excrement smells worse than theirs, but Patwardhan’s expose successfully demonstrates that the system exists on a more subliminal level too. 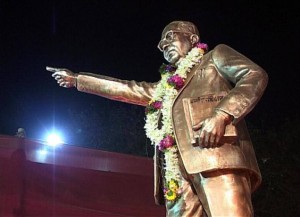 Jai Bhim Comrade also takes a focus on another figure, Dr. Ambedkar, a scholar and Buddhist who rose from ‘untouchable’ status to become a political and religious leader. It was the defamation of his statue that initiated the protest whereby the 10 were shot. Importantly the point the documentary makes, is that as much as upper-caste may try to hide this, it was he who drafted India’s Declaration of Independence. Patwardhan explores his status as idol to the Dalit and how his writings emerge within folk tradition amongst the illiterate, as well as looking at the subversion of this icon status by the political parties who use his image and history to oppress the Dalit people he represents. More just another aspect of Patwardhan’s wide focus, the parts surrounding Ambedkar are particularly interesting, and important for what they demonstrate about the ease and frequency with which history is rewritten for the purpose of oppression.

Jai Bhim Comrade continues through its examination before returning to how it started, exposing how, after 14 years, no one has been brought to justice for the 1997 atrocities, as well as returning to the musical roots of protest it begins with. Looking at a newer group, the Kabir Kala Manch, Patwardhan shows both how the cycles of demonstration and oppression continue. The group which uses musical performances to enlighten audiences on the position of the Dalit, are revealed to be in hiding from the police at the end of the documentary, (and still are,) under the charge of being Maoist rebels. Using his musical martyrs, Patwardhan illustrates poetically the state of the problem, and the difficulty of resistance.

Patwardhan says Jai Bhim was a film that fell into place, rather than one he sought to make, and this is evident, emerging as a mismatch of ideas and inspirations and forming the three hour collage it has become. He states that he did not plan a path, that he followed Ghogre’s path and let the contributions of people he met, in the slums, the waste dumps and in the streets, form the shape of the
documentary, and this is a strength as much as a weakness. The result is a fairly messy product, than lacks the hand of an incisive editor and runs to a length that is a barrier to its purpose. Patwardhan disregards aesthetic concerns almost entirely, presenting his documentary as a series of moments and voices that paint a broader picture of a society. It could be said that formal innovation often asks as a mask for the thinness of subject material, and if this is true then Patwardhan’s disregard of aesthetics makes sense.

Patwardhan himself admits to his timidity in the editing room, stating he felt he couldn’t cut anything, as while it might not directly 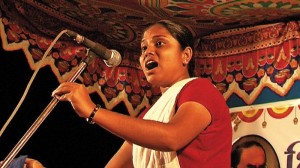 contribute to the narrative or argument, every piece of footage informs the atmosphere of the piece. The result is a rambling, straggly piece of cinema that has so much to say and show, yet may not be seen as much as it could be due to its unwieldy nature and intimidating length. Patwardhan claims he is willing to cut it down for television, but perhaps he shouldn’t have to. It is as he made it, and it does work in the form that it is in once given a chance, the individual moments culminating in an remarkably vast and convincing picture of systematic oppression, that while may not be formally clinical, certainly is emotionally engaging.

Importantly, amongst all of the corruption and oppression Patwardhan makes transparent in his film, one startling fact included makes it clear the problem is not just ideological. Two Dalits are killed and three are raped every day of the year in India. Jai Bhim Comrade is an incredibly important work that brings to attention a broad culture of atrocious oppression, dismantling entirely any argument that caste-discrimination is a thing of the past. Regardless of concerns of form and accessibility, the content is astoundingly important. As one of the protest singers states early on, it is crucial to “educate, organise and agitate,” and Patwardhan makes a valiant effort to do so despite sizable obstructions.