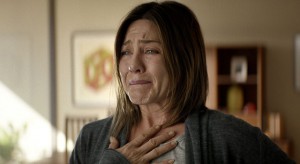 Cake is worthy of so many accolades, far more than it has currently received and far more than it is possibly ever will receive. This is one hell of a ride; powerful, moving and deeply evocative as well as providing Jennifer Aniston the chance to give a powerhouse of a performance and certainly a career best. Alongside Aniston are a whole host of incredibly talents actors including Adriana Barraza, Felicity Huffman, William H Macy, Anna Kendrick and Sam Worthington. Whist Aniston and Kendrick are best known for their work in comedy, their roles in Cake as two women who leads lives that are anything but funny are simply stunning, setting the screen alight when together and apart.

Aniston stars as Claire, a sad and depressed woman living with chronic back pain. Life is difficult for Claire, she can’t move without a sharp reminder of an accident from her past – an accident which cost her, her entire world. She lives alone but her maid, Silvana (Barraza) works daily to keep her house in order and looks out for her Claire when she needs her most. Claire has been taking part in a counselling group, led by Annette (Huffman) for women going through pain, this group is meant to act as a means for her to talk through her anger with life and find ways to handle the world that is slipping away from her quickly. One of the women in the group, Nina (Kendrick) had committed suicide before the film starts but her ghost visits Claire regularly to give her a gentle nudge to either accept the pain of her past or to just end it all. The film opens with an incredibly frank and adjusted Claire exclaiming that Nina simply took the easy way out – and why should she when these other women are left to carry on.

Claire soon connects with Nina’s widower, Roy (Worthington) and their young son – she is getting from this pair something she is missing in the rest of 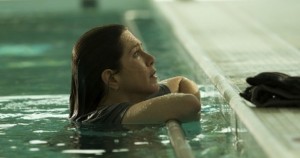 her life; intimacy, a family, someone to care for and being cared about. She starts an incredibly emotional relationship with Roy, but not a sexual one – instead each is getting from the other what they are missing and what they need. But life carries on taking it’s toll and Claire cannot figure out whether she is going to be able to deal with everything as it comes her way.

Not the funniest story in the world, and yet between Patrick Tobin’s screenplay, Daniel Barnz’ directing and this incredible cast of top notch performers, Cake wins where similar stories may have failed; it is often very funny and warm. Rather than letting the audience follow a woman dealing with death and depression, with the lose of her family, her control and without watching Claire fall deeper into her own desperation, Cake commands that all the characters find what they need to carry on living, which is ultimately a beautiful way of illustrating what so many people do everyday. It’s often the darkest moments in reality that are some of the funniest and Aniston knows how to deal with these expertly.

Barnz’ film is also so engaging, charming and gorgeously made; the colours scream at the audience and they change with the mood of the characters. The landscape takes grip of the characters and the audience throughout the film and allows the audience to feel like they are actually living in this world. They are becoming part of the life Claire leads and they become emotionally invested in her well being. Aniston does an outstanding job with what is a difficult role; had she taken the role another way it could have become ironic and dumb, another could have seen her become a nasty bitch but Aniston’s Claire is having a hard time and she lets people know but she is also willing to admit that she needs others around her.

An outstanding and underrated piece of cinema, Cake is one of the most moving films to have come out all year and hopefully will be remembered for a long time to come.