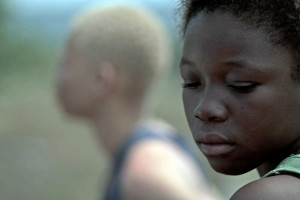 Canada’s official submission for this year’s Best Foreign Picture at the Academy Awards, War Witch, a film about a child soldier drafted into an unnamed sub-Saharan African rebel force, offers just about enough in the way of originality to make it stand out amongst a milieu of similar fictional ‘issue films’ made, nobly I should add, to draw attention to the terrible and perhaps unknown injustices of this world. Made entirely in the Democratic Republic of Congo by French-Canadian director Kim Nguyen, War Witch could have become just another uncompromisingly bleak story about the topic of child warfare made by a foreign director, something in the vein of Jean-Stéphane Sauvaire’s 2008 Johnnie Mad Dog for instance, but a tonal shift a short way in ensures it becomes something more unusual.

The narrative follows Komona (played brilliantly by the 16 year old Congolese national Rachel Mwanza,) a 12 year old dealing with the consequences, both physical and psychological, of her forced conscription. The film opens with an expectedly dark, realist tone, tracking Komona’s adjustment to the inhumanity of being part of a military unit through an array of dreary colours, constant violence and shaky camera work, before turning in on itself slightly by revealing more impressionistic inclinations. During a battle, Komona is presented with the hallucinatory apparition of her deceased parents, represented strikingly as painted-blue, Avatar-like ghostly figures, a visualisation of her subconscious guilt and grief. As a result of these visions, and the fact that she becomes the only surviving member of her battalion after an attack from government forces, Komona comes to be seen as a ‘war witch,’ a supernatural entity who can foresee the enemy and thus has considerable value to the rebel general.

It sounds ridiculous, but it does fit within the films tone, and is exactly the spark of oddness the film needs to lift itself out of drudgery, but unfortunately it is not explored enough. Following the initial haunting, the film adopts a more colourful palette and takes on a washy, dreamy aesthetic, counterpoising the bleakness of the situation with the sparse but fascinating surrealistic compositions of Komoda’s ghostly visions. As a visual representation of both Komoda’s battered psyche and of her childish tendency towards escapist imaginings the style is perfect. Our protagonist is suffering, but not beaten, and as with many children in unimaginably tough circumstances, her resilience comes from her ability to exist within her own head, away from the external suffering. To the onlooker, Komoda is barren, an emotional void, but through the well delivered narration, Komoda talking not to the viewer but to her unborn child, and Mwanza’s expressive large eyes, the audience is brought inside. 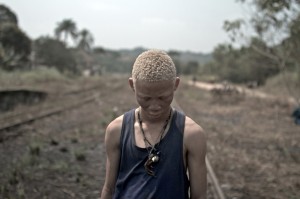 If some of this sounds a little familiar, then this is because War Witch has parallels in another independent release that went up for Oscar accolades earlier this year, one Beasts of the Southern Wild from Benn Zeitlin. Both films feature a protagonist played by a talented, young non-professional who deal with the darkness of their existence through daytime dreaming. Both explore a greater real life situation through the fictional perspective of an individual, and both feature whispered first person narration with a poetic quality. These similarities are formal and not tonal however. Where Beasts of the Southern Wild opens with its lead character Hushpuppy making some kind of mud pie home for a little bird, the first thing we see Komona do in War Witch is kill her own parents. It is not surprising then, that of the two loosely comparable releases, Beasts of the Southern Wild has become the breakout hit, it’s themes of community and redemption holding greater populist appeal than War Witch’s notes of trauma, suffering and the loss of innocence.

As much as War Witch focuses on misery, it could not be called sadistic, nor pitying. In Komoda’s resilience the audience has a model of the human spirit, and the conclusion while far from uplifting, does suggest the accomplishment of some level of closure. War Witch tries commendably to do a little more than offer a loosely moralising, liberal guilt inducing presentation of the absolute horrors of its situation, and it is moderately successful in doing so. Nguyen seems caught in between pursuing a documentary style realist tone, which he does serviceably, and pushing the boat out for something more darkly fantastical. The film’s most interesting parts are those where these surrealist tendencies are explored, but as it stands they feel like an afterthought. Nguyen had the potential to create a really probing, subversive psychological character study on top of the effective issue piece she provides.