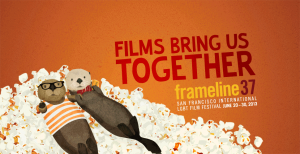 On Thursday June 20th San Francisco will host its 37th Frameline Film Festival, showcasing an array of gay, lesbian, bi and transgender, queer films. With an expected attendance of 60,000, the 11 days of this internationally renowned festival will bring together film lovers, media artists, and LGBTQ communities from the Bay Area and all across the globe to enjoy the best in queer cinema from this year’s record number of more than 700 film submissions. More than 30 countries will be represented, including Poland, Ireland, South Korea, Thailand, Argentina, Brazil, USA and Australia.

Opening this year’s festival is Stacie Passon’s Concussion, a sexy and daring drama about a wealthy lesbian housewife whose straight-laced lifestyle takes a drastic and rebellious turn after a head injury.

The prolific filmmaker, Jamie Babbit, will be the recipient of this year’s Frameline Award. The gay community can thank her for such gems as But I’m a Cheerleader (showing on Friday 21st June, 11am at the Castro Theatre), and the well-ahead of its time TV series Popular (look it up Glee fans). Her most recent film Breaking the Girls written by Guinevere Turner and starring Agnes Bruckner (The Anna Nicole Story) and Madeline Zima (Californication) will be premiering at Frameline37 on Saturday 22nd June.

The not so new filmmaking format of web series will also be getting a look in with Wendy Jo Carlton’s recent offering Easy Abby, a funny series about the ups and downs of dating and falling in love.

The Centerpiece Documentary film at Frameline37 will be Valentine Road, a compelling exposé of the 2008 California hate crime that resulted in the school shooting death of 15-yearold Lawrence King (showing Wednesday June 26th 7pm at the Castro Theatre). The Centerpiece Narrative film will be a Polish film titled In The Name Of, a visually striking examination of repression and taboo, and winner of the prestigious Teddy Award at Berlinale 2013 (showing Tuesday 25th 7pm at the Castro Theatre).

Fitting in comfortably in between all these fascinating and entertaining feature films, Frameline37 will also offer a stunning set of short films for around the globe.

The Closing Night film for Frameline37 on Sunday June 30th 7pm at the Castro Theatre, will be director Darren Stein’s G.B.F., a timely feel-good comedy about a recently outed teen and his new life as the token gay best friend for three high school queen bees.

This year’s Frameline Film Festival looks set to prove that LGBTQ filmmaking is as daring, entertaining and needed as ever.