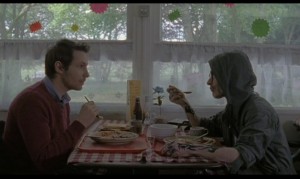 On Thursday 12th May, Kent University was swarming with young student filmmakers eager to show their latest short works. This was all part of the Short and Sweet film festival which has now been running for several years under organiser Samuel Steele. It aims to encourage student filmmakers from all over the UK and abroad to get their films seen by industry professionals.

This year the quality of work was very high with a wide selection of short films from varying genres. The Situation, was a hilarious comedy about a policeman desperate to impress his partner during a hostage situation. It was very much in the vein of Hot Fuzz and won the Best In Festival. On a far different note was Aideen Johnston’s Ding Dong the Church is Dead, an investigative documentary which combined interviews with an experimental style to create something truly unique. Another popular entry was All Fried Up, a Tarantino-esque thriller set in a roadside cafe.

The judges this year included the BBC’s Steve Finn and Mick Etherton from Beeping Bush LTD, who no doubt had a tough time choosing the winners of the competition.