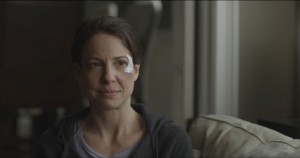 Opening night at San Francisco’s Frameline film festival is a really big deal. People start queuing outside the Castro Theatre a good two hours early. Before the feature film starts an organ player pops up from beneath the stage to play a few ditties. This year, programmers chose to open Frameline37, back in June, with Stacie Passon’s Concussion.

Take a middle-class mum from the suburbs of New York City, married to a successful divorce lawyer, mix in a monotonous life and sexless marriage, throw a literal curve ball at said mother’s head and you get the set up for this entertaining and honest look at life in a long-term relationship, coupled with one sexy twist.

Robin Weigert (Deadwood) stars as Abby. Her life revolves around house chores, spin classes, and taking care of the kids while her successful wife is at work. After being hit in the head by a baseball, Abby’s libido seems to awaken quite drastically. Amidst her daily routines, Abby and her contractor friend Justin decide to renovate a loft in the city. Desperate to ease her sexual longings, Abby hires a prostitute. She hilariously tells Justin about this, highlighting she would prefer someone a little less dirty. Her next encounter is much more to taste, which makes Abby realize maybe she could be the one getting paid for this. And so begins her new life turning tricks.

At this point in the synopsis, you could be excused for thinking “Oh c’mon! Not another bored housewife becomes a prostitute story”. However, how wrong you would be.

What ensues from these encounters, all prefaced with a coffee date, is a clever, original and often both moving and hilarious look at the difficulties most couples in a long-term relationship face. All seems well until a woman shows up who actually knows the real Abby. This throws up the issue of “it’s all fun and games until feelings are involved”.

Stacie Passon is the writer-director of this gem, and the person who should be thanked mostly for casting Robin Weigert, an actress who has shown her acting chops for years, in a leading role. Her performance is honest and fearless.

Concussion is born from personal experience for Passon. Her head was concussed after being hit by a baseball. After having a close friend read her script, she approached Rose Torche (Go Fish, The L Word) who came on board as a producer. The movie premiered at Sundance and has since been lauded throughout festivals.

While there is debate about the ending, what Passon does manage to skillfully do with Concussion is continue the conversation about same-sex relationships in an open and non-judgmental way while offering an original story to support it.