Win BOYS ON FILM: YOUTH IN TROUBLE on DVD 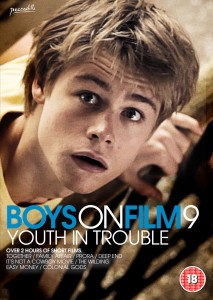 YOUTH IN TROUBLE is the ninth edition to BOYS ON FILM, the world’s most successful short film series. This compilation features a range of eclectic, innovative and genre-bending short films.

Within these eight award winning films, a friendship is tested in an ex-Nazi holiday camp, love and freedom wage war in an Australian boy’s prison and BROKEBACK MOUNTAIN exposes secrets in a French high school toilet.

When Dane’s older brother comes out, Dane doesn’t react very well. But soon after he has to choose between siding with his homophobic classmates or fighting to support his brother.

Family Affair Dir. Caru Alves de Souza (Brazil) 11mins
Rossi’s family are no different from anyone else’s but when he tries to fit in with his older brother’s group of friends, he finds the outcome more than surprising.

Together Dir. James Cook (UK) 22mins
One month after moving in together David and Mark come home to find a key in the lock of their front door. They check the house and it all seems clear, until they slowly start to realise that they are not alone…

The Wilding Dir. Grant Scicluna (Australia) 16mins IRIS PRIZE WINNER Best Short Film 2012
Juvenile inmate Malcolm is in love with his cellmate Tye, but their relationship is confined within their cell. When Malcolm is offered a shot at parole, he finds himself torn between his rare chance for freedom and protecting the one he loves.

Colonial Gods Dir. Dee Rees (UK) 29mins From the director of PARIAH
A complicated friendship between a Somali man and Nigerian man unfolds against the chaos of gentrification and displacement in the small immigrant community in Cardiff known as Tiger Bay.

It’s Not A Cowboy Movie Dir. Benjamin Parent (France) 12mins
Last night, Brokeback Mountain aired on TV. Vincent watched it and found himself emotionally compelled by the story. Whilst chatting with a classmate in the school toilets, he takes advantage of the break to describe the film as only an adolescent can.

Prora Dir. Stéphane Riethauser (Switzerland/Germany) 23mins
In this deserted former Nazi holiday camp and communist military complex, teenagers Jan and Matthieu embark on an adventure that could change everything. Whilst exploring their surroundings they confront their identities and ultimately put their friendship at risk.

We have two copies on DVD to give away, and all you have to do is answer one simple question.

Who from the Channel 4 drama, SHAMELESS , starred in one of the previous BOYS ON FILM collections?

Click below to watch the trailer or rent the collection now