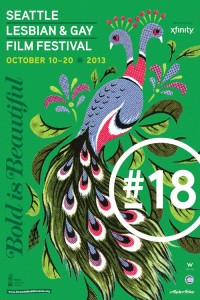 The 18th Annual Seattle Lesbian & Gay Film Festival, presented by Xfinity, returns from 10th to 20th October. This year’s festival is more ambitious than ever before, combining the very best in Lesbian, Gay, Bisexual and Transgender (LGBT) film along with unique live performances.

This year’s festival opens with award-winning I Am Divine. The film centers on how an overweight, effeminate, bullied Baltimore kid transformed himself into an internationally recognized drag superstar.

Centrepieces include the stunning Reaching for the Moon starring Miranda Otto as Pulitzer Prize-wining poet Elizabeth Bishop, the film follows her love affair with architect Lota de Macedo Soares. Stranger by the Lake, winner of the Queer Palm d’Or, a lush and explicit exploration of queer danger and desire, is a methodical, slow-burn thriller set on a seemingly serene nude beach.  And Whoopi Goldberg Presents: Moms Mabley presents an homage to the pioneering comic talent of the African-American lesbian comedienne Jackie “Moms” Mabley.

Britain is represented in the form of Simon Savory’s lush and creative Bruno & Earlene Go to Vegas. This little gem is a sure crowd-pleaser thanks to an array of great performances and a cast of true misfits rarely seen on the big screen.

The festival has also programmed an incredible array of shorts. Highlights include local talent Kris and Lindy Boustedt’s Practical Things, Danielle Villegas’ Dos Almas. Other must see shorts in the lesbian selection include Christine Chew ‘s hilarious Click and Ingrid Jungermann  F to 7th: Tweener. This year’s other collections uncover beautiful works throughout the gay, lesbian, bi and transgender community.

Apart from the Centrepieces and short film selections, other recent film festival pleasers are also represented, including: Valencia, G.B.F, She: Their Love Story, Pit Stop, Lesbiana: a Parallel Revolution, Tell No One, Camp Beaverton and Who’s Afraid of Vagina Wolf.

Web series get a look in with Wendy Jo Carlton’s Easy Abby in its feature film format.