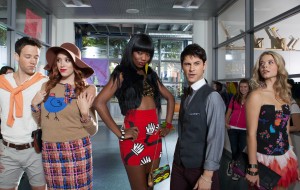 For Andrea Bowen, the fact that her new film, “G.B.F”, was set in a High School wasn’t a chance for her to go back to school but simply a chance to get to go at all. Of Desperate Housewives fame, Bowen spent most of her younger years on a television set or with tutors, rather than pacing the halls of teenage angst, acne and agonizing cliques. Now at the age of 23, she stars in G.B.F (Gay Best Friend) as one of the clique queens of a LA high school where the clothes are out-of-this-world, you go to the gym in heels and there’s a hunt for a staple gay-guy to rock the school prom into the modern world.

Bowen describes the film as “smart, timely and important” and was involved from the early days. True, it’s rare there’s a mainstream film where homosexuals are pride of place rather than as humorous side kick or quirky friend of the lead. Bowen plays ‘Shley, one of the three quirky high school princesses. Her’s is perhaps the most interesting of the three given that she’s a Mormon who’s craving for a GBF begins the complete u-turn in her beliefs, with teen-comedy-esque hilarious results. This is one of the most relatable things about the character, says Bowen, given that change is something that happens to everyone growing up, where you start to create and demonstrate your own beliefs away from the comfort of those your parents instill in you. You “try on different hats”. Interesting when you look deeper, hilarious on the surface.

The social issues in the film are obvious, but Andrea hopes the style of the film, filled with satire, keeps the viewer from feeling they’re “being preached to”. Even perhaps make them notice why the absolute acceptance of everyone in the community “shouldn’t be such a steep mountain to climb and it’s so silly it’s still an issue”.

Seriousness aside, the film looked like great fun to make, Andrea agrees that the “awesome fashion and pretty people” her own age were certainly a perk. Filmed in High Tech LA, a not-so-typical high school of sleek metal structure and ultra-modern style, GBF immediately sets the scene of a heightened world.  Bowen’s enthusiasm as ‘Shley is incredible, emanating an energy I would never have managed to keep up so consistently from what I remember. Then there’s the wardrobe by Kit Scarbo, participant in the fourth season of Project Runway, who creates the ultimate eye candy for the fashion conscious, it’s a wonder to behold. Andrea describes the set as one of the most enjoyable sets to be on if you can walk in heels with ease – a place of wind machines, impeccable hair and sweet one-liners. Basically, the high school of your dreams.

What’s next for Andrea? The possibilities are endless, and another sassy high school comedy isn’t off the books. Drama is in her veins so she always “gravitates towards that” but she has somewhat caught the comedy bug and isn’t ready to give it up yet.

Whether it be drama or comedy, TV or film, acting or directing, I hope there are wind machines.