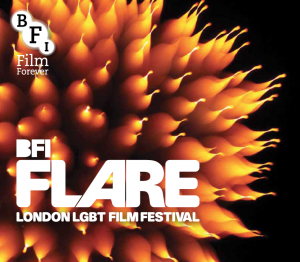 LONDON, BFI SOUTHBANK – Wednesday 19 February 2014: At a public launch event, the BFI has announced BFI FLARE: London LGBT Film Festival as the new name for its long running London Lesbian and Gay Film Festival. Reinforcing its commitment to making the best contemporary and archive LGBT cinema available to wider audiences across the UK, the BFI also launches a BFI Flare collection on its VOD platform BFI Player and a monthly screening programme at the BFI Southbank.  The full programme for its 28thedition of the film festival (20th March – 30th March 2014) supported by Principal Sponsor, Accenture was also unveiled. See full programme at www.bfi.org.uk/flare

Clare Stewart, BFI Head of Cinemas and Festivals announced the new name saying, “After extensive consultation with our audiences in 2013, we have renamed the Festival to reflect the increasing diversity of the programme and the people who identify with and embrace it. BFI Flare is inclusive and welcoming to all audiences and it also has a conceptual richness suggesting the light of a cinema projector or a beacon and the spark of an idea, moving forward and growing outward.”.

Speaking of the BFI Player’s first LGBT collection, Stewart said: “This festival has long been bursting at the seams with great films and our new platform allows us to offer access to more people in London and across the UK. We are proud to be introducing the BFI Flare identity across our Festival, BFI Southbank programme and BFI Player, bringing even greater visibility to queer cinema and expanding the access for LGBT-interested audiences.”

The Opening Night film will be the European Premiere of Hong Khaou’s LILTING, which opened the World Dramatic Competition at this year’s Sundance Film Festival. It stars Ben Whishaw, Cheng Pei-Pei (Crouching Tiger, Hidden Dragon) and Peter Bowles in a love story, a tale of culture clash and miscommunication, which is also a lyrical engagement with the effects of sudden loss, on loved ones and their close family. It was produced as part of Film London’s Microwave scheme.

The Festival closes with Sophie Hyde’s 52 TUESDAYS which won a Best Director Award at Sundance and also screened as part of the official selection at the Berlin Film Festival where it was awarded a Crystal Bear. Shot on 52 consecutive Tuesdays over the course of a year, the film follows a teenager’s struggle to come to terms with her mother’s transition from female to male.

The Accenture Gala is THE LAST MATCH, a powerful and compelling story of two young men set in Havana, Cuba, who grapple with life and love, in a tale of economic desperation and sexual awakening.

The festival’s films are grouped into themed sections as follows:

This section showcases a rich crop of dramatic features including upbeat American high school comedy, G.B.F. which explores the comic implications of the outing of a male student who becomes the darling of the reigning prom queens but loses sight of who his real friends are, and features a great cameo by Megan Mullally as an over-supportive pro-gay mother. C.O.G. is the first film adaptation of a work by David Sedaris, and this road movie meets student journey of self-discovery will not disappoint his many fans. Returning festival favourite Marco Berger brings HAWAII a beautiful and subtle film of two childhood friends who unexpectedly become re-acquainted as adults. Dappled sun-light and dreamy nostalgia feature strongly in LAST SUMMER  a film about two teenage friends facing up to losing each other as one is about to head off to college. Memories of the 1980s and a great period soundtrack feature strongly in TEST, an account of the trials of a young male dancer learning big lessons about love and life in San Francisco in 1985 before mobile phones.

DUAL is a charming story of an encounter between a lost tourist and a female bus driver late one night on the way from the airport. REACHING FOR THE MOON is a powerful account of a famous novelist and her architect lover in Rio de Janeiro whose lives encompass dramatic highs and lows, both professionally and personally.

Twenty years on from his death we feature a screening of a never-before-seen experimental work by Derek Jarman, WILL YOU DANCE WITH ME? filmed as a test for Ron Peck’s EMPIRE STATE. Derek roams around Benjy’s nightclub in 1984 among an invited group of club patrons which includes actor Philip Williamson and a cast of regulars.

Recent events in India will not prevent us celebrating some of the queerest things in Indian culture with rare big screen outings for PAKEEZAH(1972)  and MUGHAL-E-AZAM  (1960) while Dr Rajinder Dudrah gives a talk on Bollywood -LGBT Style: Queer Readings of Popular Hindi Cinema and Club Kali hosts a big themed party too.

Exec produced by Rose Troche and directed by Stacie Passion, CONCUSSION is a bold drama about a well-heeled lesbian wife and parent who discovers a new way to deal with suburban ennui. WHO’S AFRAID OF VAGINA WOLF? is a genuinely hilarious, new comedy from Anna Margarita Albelo starring Guinevere Turner and the director herself plays a 40 year old bohemian lesbian who is forced to make a film in order to follow through on a dating stratagem.

Bruce LaBruce remains a deliciously subversive filmmaker, his latest GERONTOPHILIA world premiered at Venice and charmed audiences with an account of a young man working at a care home with a passion for much older men, cocking a snook at the youth cult of contemporary life.  THE PASSION OF MICHAELANGELO is a fascinating  re-imagining of a true story of an alleged teenage prophet whose visions of the Virgin galvanised the Chilean masses, but the inside story reveals sex, politics and deceit on a grand scale. I ALWAYS SAID YES: THE MANY LIVES OF WAKEFIELD POOLE is a documentary about a pioneering pornographer (Boys in the Sand) whose fascinating life took in performing with the Ballets Russe, Broadway, pop art, and much more.

AGE OF CONSENT was inspired by a screening at last year’s festival.  This access-all-areas documentary by Charles Lum and Todd Verow  features the inside story of The Hoist, London’s only permanent fixture leather bar, what goes on there, its patrons and how its story reflects on the wider gay culture. Some scenes of a sexual nature.

Programmer Michael Blyth dissects the fascinating homo-erotics of gay horror films with a talk Queer Eye for the Dead Guy: A brief history of LGBT horror plus four of the best on the big screen: A NIGHTMARE ON ELM STREET PART II: FREDDY’S REVENGE, THE LOST BOYS, FRIGHT NIGHT and BUTCHER, BAKER, NIGHTMARE MAKER.

Programmer Emma Smart, inspired by the global phenomenon that is Orange is the New Black, gives an illustrated lecture entitled We Love Caged Lesbians, followed by a rare screening of the 1949 classic, CAGED, with lesbian sub-texts a-plenty. And enjoy a special Caged Lesbians Afterparty in the Blue Room.

Highlights include a very strong range of documentaries: THE ABOMINABLE CRIME covers the lives of a lesbian survivor of a murder attempt and a male gay activist under threat in Jamaica, while BORN THIS WAY (presented in association with the Human Rights Watch Film Festival) is an exploration of brave initiatives in campaigning for gay rights in the Cameroon. The Abominable Laws is a discussion event which will focus on the appalling legal situation for many LGBT people around the globe. BIG JOY: THE ADVENTURES OF JAMES BROUGHTON is an insightful portrait of a poet and experimental film-maker whose art and life culminated in 25 years of love with a younger partner.  BRIDEGROOM is a poignant celebration of the life that two young gay men had before a sudden death, when the survivor was brutually snubbed by his boyfriend’s family. CONTINENTAL is a great documentary about a former early 1970s, New York landmark, gay bath-house which launched the careers of Bette Midler, Barry Manilow, Frankie Knuckles and more. VALENTINE ROAD is a heart-breaking study of the murder of young gay high school student.  MY PRAIRE HOME is a celebration of the life and music of the much-loved genderqueer Rae Spoon, while KATE BORNSTEIN IS A QUEER AND PLEASANT DANGER is an inspiring look at another gender outlaw.

Film-maker Allyson Mitchell will have a lesbian-feminist art installation at BFI Southbank for the duration of the festival: Killjoy’s Kastleis a haunted house style encounter with the horrors of political division and community politics. Allyson will also give a talk about her work as a film-maker and artist.

Archivist and DJ Jeffrey Hinton opens up his personal archive to explore the history of clubland drag in Life’s a Drag (a celebration) followed by a rare screening of THE ALTERNATIVE MISS WORLD (1980) (Andrew Logan hopes to attend). Stephen Beresford talks PRIDE in an on-stage interview with the writer of one of the most eagerly awaited films of 2014, a major new film called PRIDE, a drama which uncovers the remarkable true story of the Lesbians and Gays Support the Miners movement in 1984. BFI FLARE family fun has a morning screening of a family favourite THE MUPPETS MOVIE. We will have our ever-popular Late Night DJs in the bar on Fridays and Saturdays during the festival too.

The 2013 edition of the festival took place over 11 days and enjoyed an extraordinary audience response with 22,000 attendances, an increase of 1,000 on the 2012 festival, across 130 programmes of screenings and events.