TOYS ARE NOT FOR CHILDREN BLU RAY REVIEW 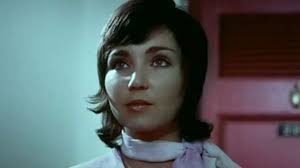 Sometimes a film comes along that is uncomfortable in its challenges to the audience. It might be troubling or thought provoking but these ideas can help discuss major issues. Issues that society might find it impossible to talk about or get past the exterior. I can think of films like SALO, DELIVERANCE or say PEEPING TOM. TOYS ARE NOT FOR CHILDREN for me, stands in this group. Its tale of self destructive incestous desire, is highly charged and magnetically handled.

Stanley H. Brasloff’s film is a rare piece of the sublime and the potent. As the write up from Arrow themselves suggest, it is a ‘Grim, quirky and strangely affecting film’. I would add it is a powerful film about sexual identity and the corruption of it by unhealthy relationships. Brasloff uses the nativity of his lead character well. 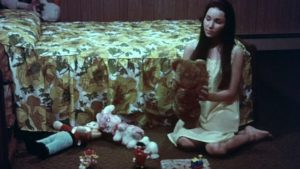 Defining her as a sexual charged and malicious being. However this has all a root cause and this is obvious but as the film progresses, it becomes unhinged. The feature by Stephen Thrower, delves into the horror of this in pertinent and passionate detail. The horror is very much in ours, as well as her mind. Kat Ellinger and Heather Drain commentary is also fascinating. Driving the conclusion home and is something I would recommend listening too, once will on first watch and then one after. 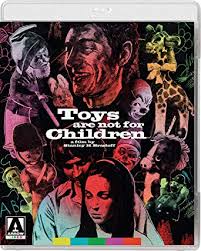