Slashers of the 1980s have seemingly become idolised and championed. Many of those who missed them the first time around, now see them as oddity, pastiche or novelty. Many who saw them at the time remember the classic death sequences or the ropy effects and acting. Labels like Arrow have pumped out these with much vigour, with questioning glances about how they should be consumed and/ or considered. As for the films themselves, well  they are a mixed bunch of films in which, put simply, teenagers are sent out to be bumped off.

They are often taken out with increasingly staged and sophisticated set ups. These involve a serious of blood splattered bodies and gore filled carcasses. The peak of this genre is Halloween. A clever and often skilful cinematic piece that inspired many other versions of the same. Other notable films were Friday the 13th series. They are increasingly absurd without trying to be alternative and after a point, they seem to give up any notion of rational thinking.

Doom Asylum is a lower end slasher in some respects and a higher end send up of the genre troupes in another. It comes across often as a film that is breaking out of its natural restricted conventions of the genre. Sometimes this works very well. Sometimes it lacks the substance or subtly to hold up when pushed a little. So the script and film can come across as simplistic and sardonic, which confuses us. Is it being knowing or thoughtful? Does it lack edge and ambition? In the end the film is a great over blown pastiche, with bloody gore flowing, teens screaming and monster splattering blood. Copy / Paste ideas are fastened down with the structure and sometimes this is accidentally brilliant. Sometimes shifting gears it actually heightens the parody within the piece. Like any other genre film however it is riddled with convention and contradictions. 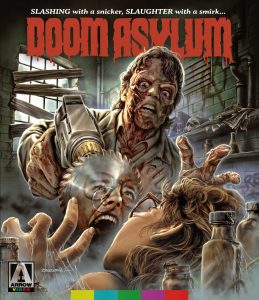 2K restoration is very good indeed. I would even suggest it makes the work of cinematographer Larry Revene look better than it might actually have been? The excellent commentary on the disc from the Hysteria lives is funny. Shrinking the film into foot notes that are tactful. 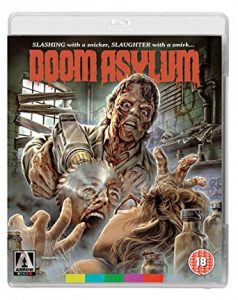