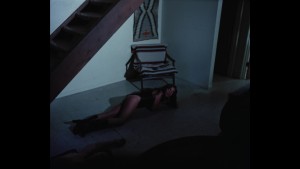 After a robbery goes wrong and innocent clerks are murdered, the robbers flee to a rural house in the snow capped mountains to hide. They however are quickly dispatched by an unseen and evil doing person. When police arrive they arent sure what has happened. Is it a ritual killing or a revenge attack on the robbers? Legend has it that a mountain man. Some friends arrive at the same mountains and set about having a lovely time. They are warned however that a scary mountain man of legend is out to kill… 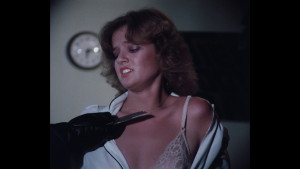 When you see these films are listed as unseen gems or undiscovered genre classics, you always get worried. By this I mean that the mis selling of the film as a commodity for the audience targeted to buy it, is dangerous! You find that often Pyrite is dressed up as Gold. We have seen with Arrow that they have tried to box some mediocre films like this and Satans Blade is not totally an example of that. It has creative elements that deserve recognition and it deserves to be seen but on the whole the film is not very good. 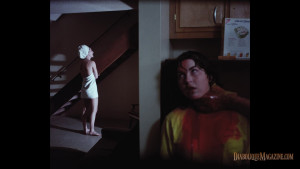 Craft and style have been executed in places very well for a low budget film. The use of deep space, fast cutting and pacing is very well controlled. The use of the frame sometimes made me so impressed as to be ready to shake the hand of the director. The positives are easy in that they are all visually and form driven. The negitives are more complex. The acting is poor, sound is wavy and empty headed in places. The central idea lacks cohesion and tension. It takes too long to get anywhere and finally the set up – pay off is weak. 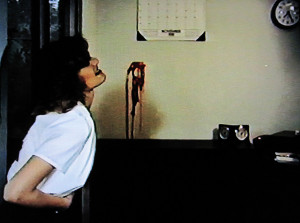 Arrow have added some value here and to be sure it is worth a punt to the horror / slasher fan. The Hysteria Continues commentary is excellent and they prove their skill in film narrative that is both sardonic and satirical. The transfers have cleaned up any issues from before. The artwork is great and the booklet is excellent.