George A Romero : Between Night and Dawn Blu Ray review 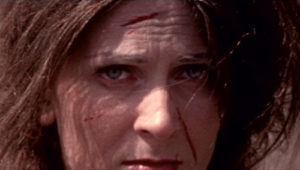 Romero literally cast horror cinema in his image or at least his classic films Night of the Living Dead and Dawn of the Dead’s image for a generation. He create a new, visceral film style that lives and breaths today. Now thanks to Arrow Films we get to see three films he made during the intermediate years. Some 8 years that saw him take on genres familiar to his fans like Horror The Crazies, less known in thriller Season of the Witch and very alien to them with comedy There’s always Vanilla. 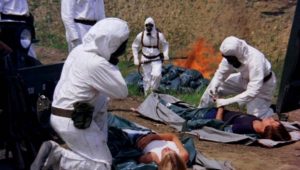 The Crazies opens the set and is for many hardened fans his most familiar work. A laboratory virus that might be used to start a pandemic has been opened when a plane carrying it crashes. Now the army is sent into clear the nearest town as some of its people have turned into crazed monsters and are attacking folks. Deftly skilled storytelling that packs swiping satire, abstract violence and genocide references, this is a stand out film. It has also aged badly in places. Though I only mention this as younger, hipster audiences might sneer at the ropy effects and miss the really points being made. 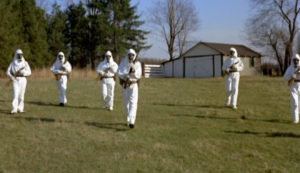 Its a huge take on the then war in Vietnam and its indifference from the core supporters (and armed forces serving types.) For me its a builder of political discourse and socio economic ideas that might be a masterpiece. A film that must be watched and one that is served well by some of the Blu Ray extras. The transfer looks great and blows the DVD that was around out of the way. The location doc is great but the audio commentary is awful and I felt dulled and bored by Travis Crawford. Sorry Travis. 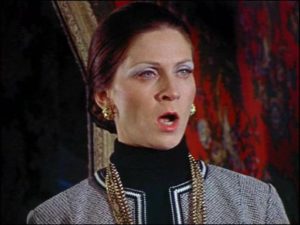 Season of the Witch is the stand out work in the set for me. When a bored housewife is stuck alone in a town with her husband away working, all seems to be despair and isolation. When she dabbles in the occult, things become far darker. A darkly unsettled parable about modern living, sexual politics and identity it is so clever and subversive. Romero makes great use of lead actress Jan White. She gives great layers of desire, fear and irrational joy. 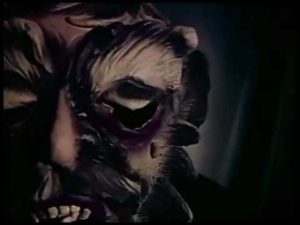 Its a well structured film that starts like a half developed film school piece by some self involved director of age 20 but ends as a storming angry piece. The disc is well served with features again the transfer is delightful. Clean and crisp in places outside of the print damaged stock of course. Travis Crawford makes a better case for his work in this commentary. He seems to get the hues, tones and tension of the film but I still find his way less engaged by and large. Again sorry Travis.

There’s Always Vanilla is a film of its time and one that I liked for its irreverent humour. The son of a baby food empire makes his girlfriend pregnant and decides to stay with her. She however sets out to get an abortion. 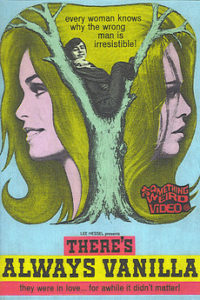 The themes are so controversial then and now that its sting is potent. However Romero handles it with a wit that is characteristic and contained. It never falls into parody or patronising stupor. It is always swift and takes on the time. It reminded me of some of the kitchen sink films of the British new wave but with more humour and less bleakness. The disc is good. Transfer was okay. I felt the colour issues were still very evident and its not fair on the big spender. That 2k I guess for you. The extras are very good however with the stand outs the interview with the legend that looks at his early works. This enlightened and added some very new information to a film maker I have a lot of time for indeed. Though he is no longer with us, he is a film maker that explored this world and its comedy. He got that horror wasn’t just fright (like say James Whale before him) and understand that sometimes more is more….

•        English subtitles for the deaf and hard of hearing

•        Digging Up the Dead – The Lost Films of George A. Romero – archive interview with Romero discussing his early films There’s Always Vanilla and Season of the Witch

SEASON OF THE WITCH

•        Romero Was Here: Locating The Crazies – Romero historian Lawrence DeVincentz takes us on a guided tour of Evans City, PA and the locations used in The Crazies