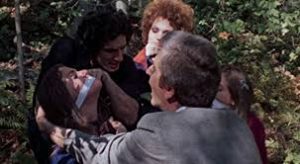 There are very few films which require little or no introduction. From say Citizen Kane to The Last House on the Left, they are a range of films and qualities. Last House is neither a very good film nor is it distinct in style or content but just as the critic Mark Kermode made the case for it, it is important. It defines a point in film when censorship in Britain became self destructive. 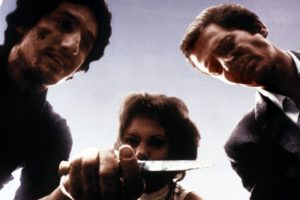 When Mari and her friend Phyllis set out for a concert, they hear of a gang lead by psychotic killer Krug Stillo (Fred West lookalike David A. Hess) that have escaped. Mari needs weed to really enjoy the night but as the pay off sets up, she and her friend are about to meet the gang. The gang want more than a dance and as expected its not going to end well. This will lead to a night of torture, murder, rape and horrors, which society will never forget. 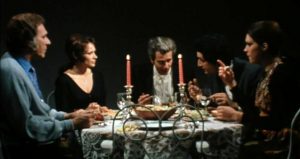 There is a lot to say about this film and to be fair less about the boxset. The films most infamous moment in recent history saw the above Dr Kermode plead for its release in an uncut form. He is not a fan of the film but is of freedom of creativity (to an extent). His standing up for it at trial lead to it being cut even more on release. 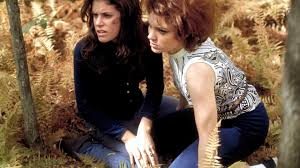 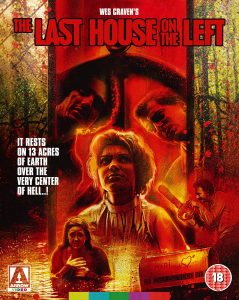 The set is an up scaled version of the triple disc set that appeared in 2008. Its all the films in 2K version that make the grue a little clearer and the scuzzy aspects of the film, a little richer.  Some of the extras are worth spending time with. The new commentary for instance is a highlight.

DISC ONE [BLU-RAY] – THE UNRATED CUT

High Definition Blu-ray (1080p) presentation of the Krug & Company and R-Rated cuts of the film
The Craven Touch – a brand new featurette bringing together interviews with a number of Wes Craven’s collaborators including Sean S. Cunningham, composer Charles Bernstein, producer Peter Locke, cinematographer Mark Irwin and actress Amanda Wyss
Early Days and Night of Vengeance – filmmaker Roy Frumkes remembers Wes Craven and Last House on the Left
Tales That’ll Tear Your Heart Out – unfinished short film by Wes Craven
Q&A with Marc Sheffler from a 2017 screening of the film at The American Cinematheque
Krug Conquers England – archival featurette charting the theatrical tour of the first ever uncut screening of the film in the UK
DISC THREE [CD] – ‘THE LAST HOUSE ON THE LEFT’ ORIGINAL MOTION PICTURE SOUNDTRACK