Bridging the Comedy and Horror genres, ELVIRA : MISTRESS OF THE DARK returns again to our screens. Elvira (Cassandra Peterson) has gone from her deadbeat TV station, screening B movies to a small town called Fallwell. The reason she is there is simple, her rich aunt has left her a house in her will. She has inherited this , ahead of her evil uncle. He wants a special spellbook that is in the house. The locals are less than impressed. Local conservatives have raised eyebrows and low foreheads. They want Elvira out…they want her out at any cost.You see she is being blamed for all manner of weird things going on. No matter how sexy she or these events are, they want her burnt! So does her evil uncle! 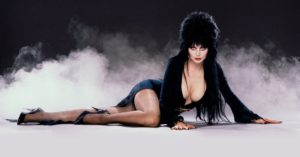 Elvira cookbook says to combine a pinch of 80s horror, 80s comedy and B movie nonsense. Having only seen the show introductions (they are on youtube btw!), I knew vaguly what to expect.Elvira may have little else to add to the mix, might not be a genre masterpiece or even be worth long term appreciation. It sometimes feels a little unbalanced (in the era of #metoo, some may misread it as offensive. It is not!) Sometimes as well it just lacks anything special. However saying all of that, its fun enough to spend an evening with. Elvira is a campy, sardonic film about genre, emerging cult fandom and of course, the rocky road of fame. It pokes fun at the conservetism spreading in the US, which comically lead to moral panics about the so called evil affects of horror films (which proved dicey at best). 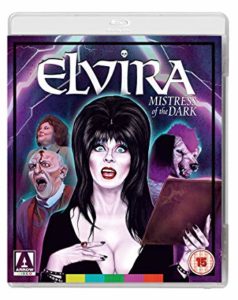 The best 3 extras on the disc are. Archival audio commentary with actors Cassandra Peterson, Edie McClurg and writer John Paragon. Cassandra is able to both make the film commentary funny but also reveal the work her and Paragon put into those zingers. Too Macabre – The Making of Elvira: Mistress of the Dark – newly-revised 2018 version of this feature-length documentary on the making of the film including interviews with various cast and crew and rare never-before-seen archival material. This is an archive document that puts the film into its position both time and genre. Recipe for Terror is may favourite feature. The creature work is always a rewarding thing and the creative process helps unveil how much work it takes!