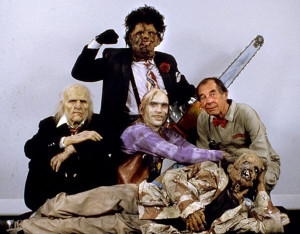 Chainsaw and screaming were rife in the original film. A cacophony of fear and casual brutality. Gore and blood were absent but this steered the pot and made it more disorientating then many expected.  TCM2 however wants to reconstruct the series and recast it in the eyes of its original director Tobe Hopper with jet black comedy at its heart.  This could have gone either way. In Hopper’s opinion the original was a black comedy. It felt less funny and more like being kicked in the gut and at its end, being given release from a death sentence. Something redemptive. Something extraordinary happened in its wake. This film, which has to be compared to its predecessor, fails to translate the economy and genius of its forefather.

Buzz and Rick are going to the game. They are also drunk like skunks and want to get some action. They call a DJ (Caroline Williams) who is a woman to harass her, nice guys. They profane at some passing trucks, who happen to be the family that include Leatherface. The family don’t like hostility and cut them up (literally). This is overheard by the DJ and causes panic. When the ‘accident’ is investigated by Lt ‘Lefty’ Enright (Hopper) someone is going to get found and pay for this. 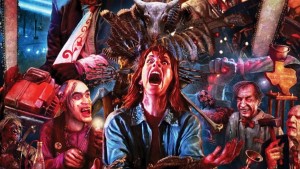 The problem with TCM2 is three fold. One it is its origin, that is the most deeply unsettling masterpiece of horror ever made. It is going to be hard to match that and even exist in its shadow. However some argue that the same director, Hooper should have made it coherent and comparative. He wanted the film taken in a new direction and look to explore components missed by the original films audience. This he fails in because the comedy is so over the top and yet misses satire or sardonic levels of thought. Why? well because of problem two. 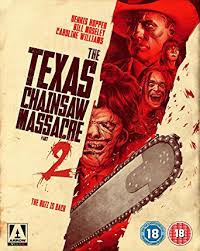 Problem two is or was era of release. The slasher was falling on its arse as TCM2 was released. Hooper tried to appease one side due I guess financing and made the price the excess of visual violence. Gore, splatter etc. He falls down on this because he is not a director that understands its tension nor its expression. Three it is that Hopper is better than the material. Watch The Funhouse or Salems Lot to see my proof. Sometimes a sequel can fall WAY short of its predecessor. This is that time.