Let me lay it on you Willie! You gotta make sure that things ain’t bad. Let me lay it on yah, you gotta do what the organisation wants yo to do man. It ain’t cool to be like that. Thing is people gonna kick yo arse if you aint gonna keep you bitches in line. Bitches always be wanting to win but you gotta run the way we say. Otherwise Willie, you gonna have to do something and you sure doesn’t want to do that and we sure does not want to make you do that. So better you got some angry bitches, then say nasty gun wielding guys. They want some more cream and sugar in that black coffee they have been drinking. The cops want Willie silenced and under siege. When the organisation sets out to mess cut in on his game and his bitches payroll, well Willie sets out to break heads and save his bitches and his money… 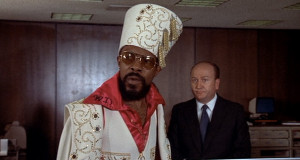 Oh dear. I do like a good Blaxploitation film that develops on the well worked and trodden pride and black rights stance. I sometimes feel a little unsettled when the films build on stereotypes that are unhealthy and unhelpful. Take Willie Dynamite the black pimp and hustler that is played by that old guy off Seasame Street. He is the worse kind of stereotype but then I think somewhere along the line people seem to have forgotten that this is a parody. What I mean by this is that the film is a sheer send up of the conventions of the genre but with a layer of social commentary that is half cultural examination and the other half, audience expectation. Those that find this sneering are not getting that the genre had got to a point that many, including those in the genre were bored of its conventions. Films like this came and mocked them with skill and a flavour which was essential. Now it doesn’t always work but it does on balance have more ups than downs. I wouldn’t rush out to buy however. 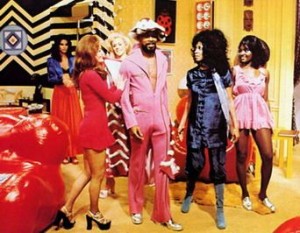 The disc has one high point, the excellent guide to blax…Kiss My Baad Asss!