Donald (vet comedy guy Jackie Vernon) is a guy that works on a construction site by day and goes home to suffer under tin roof and the wife. She has a feeling for microwave meals, faux flowers and plastic furniture. One night during the nagging session that is filled with complaints in regard to Donald having dirty shoes and grim on his clothing, he kills her. Then he takes the body, chops it up and then microwaves the remains.  Problem becomes simply this…Donald likes the taste of the human flesh after it has been fried in microwave delights! 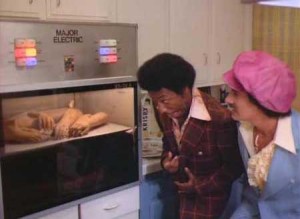 Home applications and the way they crush us. We have this in many films. The audience is often pondering how the world of home comforts are not only being consumed but are consuming them. The consuming of money, resources and even time after time use. Microwave Massacre brings this conversation to the centre in a way that is both silly and grossly abstract. Silly because it verges on the bizarre and satirical but also grossly abstract because it never takes itself at all seriously. It hits its target direct in the centre often enough but does so without being too serious about it. These are the ideas of the working man, domesticity and sexual repression in the middle classes. Delightfully horrific and funny in places, Microwave massacre should be seen as a film of many different jokes and tones. Jokes that are on a number of levels and tones that are both natural and universal. 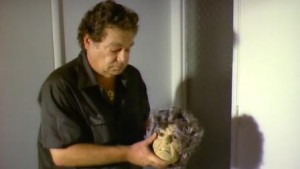 The new transfer is sexy and cleans up the dirt of the former release. The HD is amazing and I love it. The features are ok, in truth I only really liked the commentary. Everything else is a much – much….