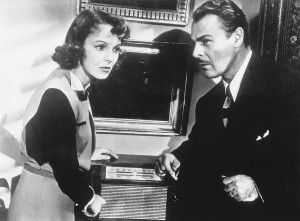 The Nazi occupation of Czechoslovakia has been on going for sometime. The German dominance of the people, the law and the land has been meet with fierce resistance. The Nazi top brass have a evil and tyrannical leader in Reinhard Heydrich also known as the ‘Hangman’. He is known for his brutal executions of the people who either stand up to him or mirror the indifference the people feel for the Nazi’s evil cause. When he is shot by members of the resistance, the Nazi team goes to work punishing the people. The assassin is a surgeon who is trying to flee but has been unable to find safe haven. Finally he finds a safe haven but them city being on lock down and the family housing him being targeted for his position, it might mean he has to give himself  up and the people have to succumb to the Nazis. 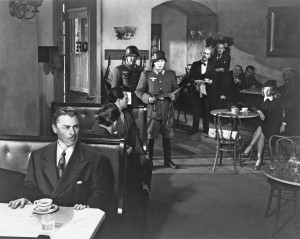 Film noir? Action thriller? War propaganda? Well this film is a mixture of all three. It has some really weighty people behind it. Bertolt Brecht is the stand out in so much as this is his only US film credit. He was the proprietor of art as a self reflective device. Here it has weight and does stand up to the viewer. I mean by this that the underlining to us of the idea of what we would do and how we would react to the oppressor, if we were oppressed. The other name is the director Lang. A person to be in awe of. He made some of the most interesting (in terms of form and theory) films of the silent and post silent period. Here he uses form to imprison us in this world and also to construct the feeling of restriction.  Hard to do in truth but he pulls it off very well. The light and dark aside, it is the cameras movement in enclosed space and its fear of the outside light, filled with menace and eyes. A real delight for me. Take the Gestapo headquarters as a example of amazing mise en scene and film production by director and crew. 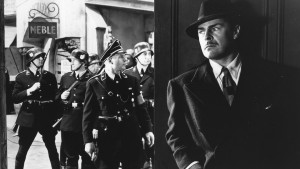 Another name is James Wong Howe. He pictures tone, balance and unsettling space with great skill but also great restraint. Yes it was he that filmed Seconds and Sweet Smell of Success, both looked gorgeous but also felt harshly over filmed in cinematographic terms. This was intentional. Here he needed to not do this. So The film is a delight for the visual fan. The script and the written pieces are less compelling but it is the visual that I delight in. I have to also add this is the complete version and that version is too long. Too long by say 25 minutes. I enjoyed this however as I was able to understand the film makers intentions. We see, we emote, we decide, we support.

Extras. Well some have said these are never explored in full. They are the work of skilled professionals and deserve respect. Yes that is true and as such I will say that the 2k looks great and jumps over the DVD version. The Pena commentary is insightful and worth the price of the film alone. The Heydrich interview with Gerwarth is also very compelling and informed. The real stand out is the sleeve….