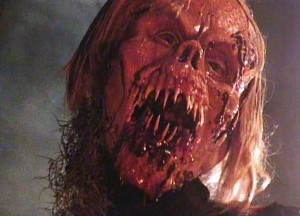 Nightmares are keeping troubled artist Kay awake at night. She keeps seeing the future and that future is horrific. Murders that feature horrible events with such horrific violence that she is deeply disturbed. Kay partner and her friends tell her that a holiday would help. The remote island getaway will be the best option. It is quite, restful and they can drink and eat without any issues. When however they land on the island and the pilot suggests it is not such a lovely place, Kay is scared. When the friends and partner go missing…well she now knows that the dreams are becoming reality…. 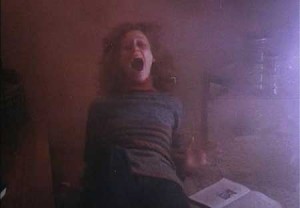 This slasher was hidden away for quite some time. Not unsurprising this as many slashers of the period have been failed by DVD and Blu Ray releases. It has also been only available in a truncated version that was missing some of that well executed slashing fun. Now the sad truth is that some of the films that have found their way to us, are terrible but wait for it. The Slayer is a film that can be considered a high point in the slasher genre. A rare feat! Why? Well it has rich storytelling, direction and acting. It is well paced and shaped. It also has great executed set pieces that linger. 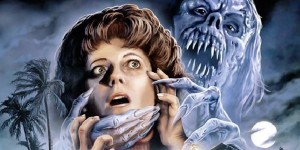 The extras are a delight but  the quality of the Blu ray is unknown to me. Audio Commentaries from the cast and crew add something of the feel of the film. The Hysteria Lives add some quirks but I am less interested in what they had to say each time. The making of The Slayer for me was the delight in that it features some really fundamental reasons for film makers.