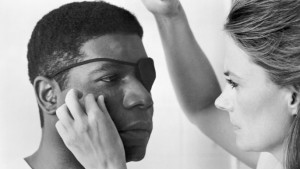 One man Vincent Towers (Michael Harris) meets another Clay Arlington (Denis Heysbert). Vincent says they look alike, this is due to many reasons but we might be being fooled. One man is black the other is white. They drive to a strange and obscure house in the middle of no where. They enter and find it empty with covered up furnishings. It transpires that Vincent might have killed his father. Vincent needs to go to the airport and needs to be driven by Clay. As Clay pulls away from the airport, the car explodes…

Neo noir is a term thrown around. The 90s created films that were harder to fix into a genre than many would be open to admit. The New Indies challenged the core structures and I would challenge those who aren’t sure about this. This film is not just a neo noir and should be seen also as a meditation on the self, identity and reality. It is a film that might have been crafted by Nic Roeg, who was interested in these topics. Well directed and filled with imaginative ideas. Its composed of visually interesting sequences, editing dissolves, image merges and the reflective. The performances are complex and feel restrained. This is too make the film engaging but also to lend to the comprehension of the viewer. I single out Heysbert here. You see this could have drifted into ridiculous but he makes you convinced enough that it is real.

Now Arrow have given us much to work with here. 4k on the blu is great but the DVD is fine (if only a bit grained). Commentary by the two Siegel and McGehee helps to make the above judgements  sound. The deleted scenes are fantastic and really add complexity. Overall it is excellent and worth time to invest in and watch. The reward is in its sheer cinematic brilliance on a shoe string…